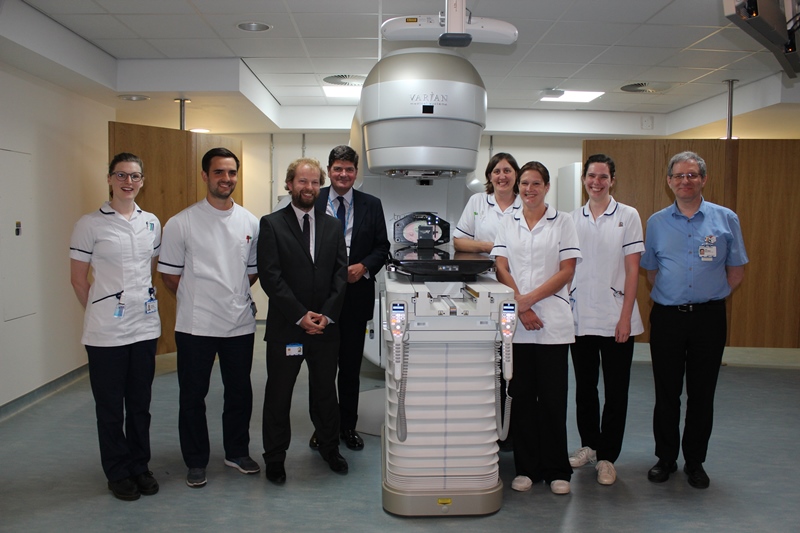 A second machine to help patients in the fight against cancer has been installed at the Queen’s Centre.

The Varian TrueBeam linear accelerator, or linac, will be used to deliver radiotherapy to scores of patients each week, and has been paid for through the national £130m Cancer Modernisation Fund. This is the second linac to be installed at Castle Hill Hospital in Cottingham which has been paid for via the fund. It has taken a mere eight weeks to commission and get ready for use; four weeks faster than would normally be expected, according to the manufacturer.

“Radiotherapy can often be a long course of treatment, sometimes daily for up to seven weeks, which is a huge amount of time for patients to be spending in the department.

“Being able to offer treatment with the most modern equipment provides patients with confidence and a much better experience, but it’s also more rewarding for staff as they can see the benefits for their patients first hand.”

Joining Chris were a number of radiotherapy and medical physics staff, plus colleagues from other teams who have played an important role in getting the second linac to the Queen’s Centre.

Also joining them to see and hear first-hand how the kit and the team are working to benefit thousands of cancer patients every year were Cllr Jonathan Owen and Cllr Jane Evison from East Riding of Yorkshire Council’s Health, Care and Well-being Overview and Scrutiny Sub Committee.