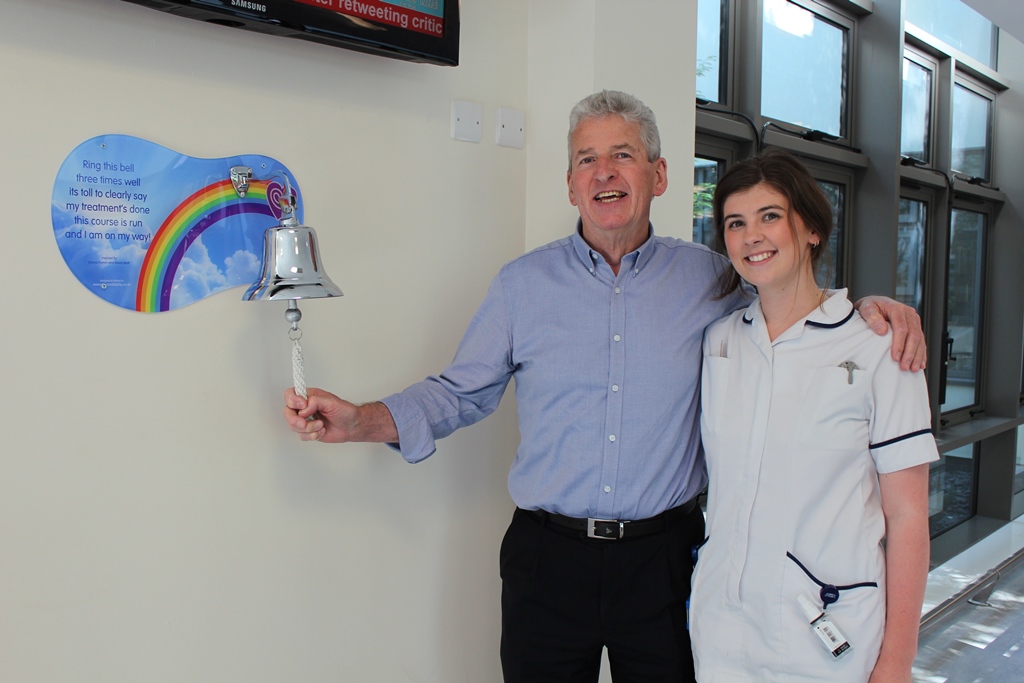 It’s a sound which can be heard several times a day in the radiotherapy department at the Queen’s Centre, raising a smile for staff and bringing hope to patients who are undergoing treatment.

The toll of the newly installed ‘end of treatment bell’ signifies the end of a person’s radiotherapy treatment, and since it arrived in the department in May, the bell has been heard dozens of times.

The end of treatment bell was donated by a national organisation which originally began providing the bells to children’s cancer wards, but the symbolic and emotional benefit for people of all ages was soon recognised. 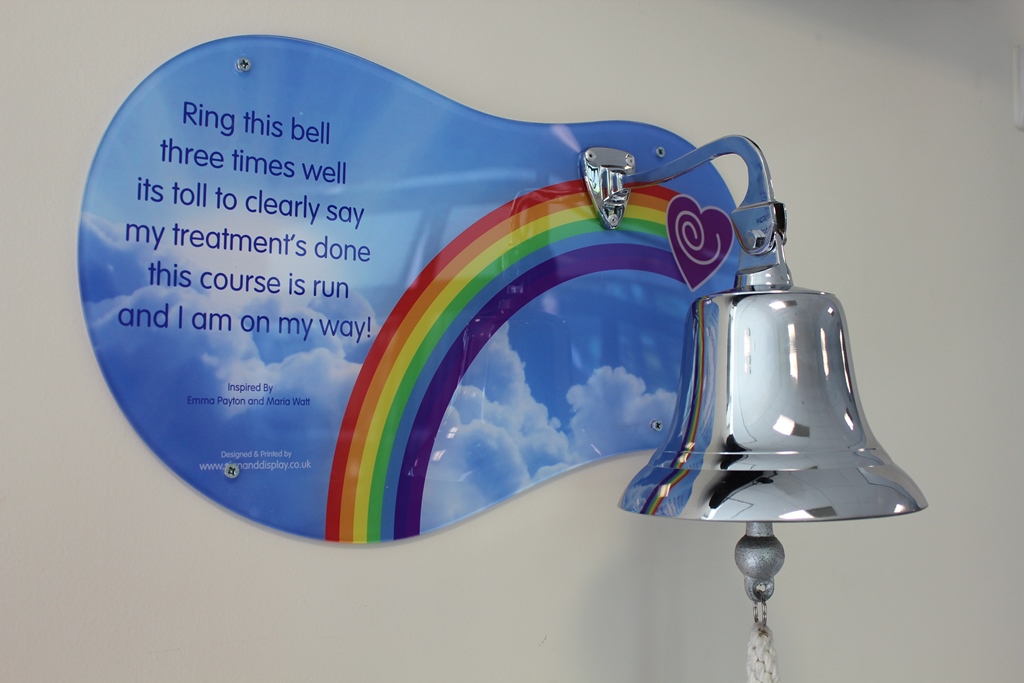 One of the latest patients to ring the bell at Castle Hill Hospital, marking the end of an eight month fight against prostate cancer, is 72-year old Stephen Buckley, from Bridlington. Stephen was diagnosed in October and began his hormone and radiotherapy treatment just after Christmas. He says:

“I owe my life to the NHS.  I’ve survived a broken neck and a heart attack in my time, but when I was diagnosed this time, it shocked me to the core.

“I was told I’d need a course of 20 radiotherapy sessions which I began after Christmas, so I’ve been travelling daily from Bridlington for treatment, that’s 1200 miles in total! Ringing the end of treatment bell is something I’ve been looking forward to since day one. Every day I walked past it, I thought ‘I shall be ringing that bell off the wall soon’.

“Personally it’s been a very stressful time, for me and my family, but the staff have been brilliant, they’re all so knowledgeable and helpful, and we always have a bit of banter. I’ve made friends with quite a few of the other patients too who have been coming for treatment at the same time, so we’ve been supporting each other and getting each other through; it’s really been like coming into a family environment.

“On my last day, I definitely had mixed feelings; it felt strange to think I was having my last treatment but I was happy too; it’s all been five star, I cannot thank the NHS enough.”

The installation of the end of treatment bell was the idea of Hull University Teaching Hospitals NHS Trust Therapy Radiographer, Lydia Dearing. She says:

“We’ve had a lot of interest in the bell, a lot of people have asked if they can ring it, and we often see our radiographers come to support the patients they have treated when it’s time for them to ring the bell.

“Patients can sometimes suffer side effects as a result of treatment, such as sore skin or loss of appetite, so for those who are going through a bit of a tough time, it can give hope or help to remind them that there is an end in sight.

“We’ve had loved ones bring in their families and balloons when it’s been time to ring the bell to make it a real celebration, and we’ve had groups of patients who have made friends during the course of their treatment all come in to support each other when they ring the bell.

“It’s not for everyone, but for many, and in particular those whose treatment has lasted a long time and maybe included surgery or chemotherapy, it signifies a significant milestone and what will hopefully be the start of their recovery.”

Having seen the value of the bell first hand, radiotherapy staff are now looking to raise funds to cover the cost of another bell which will be used to help patients at a different hospital.