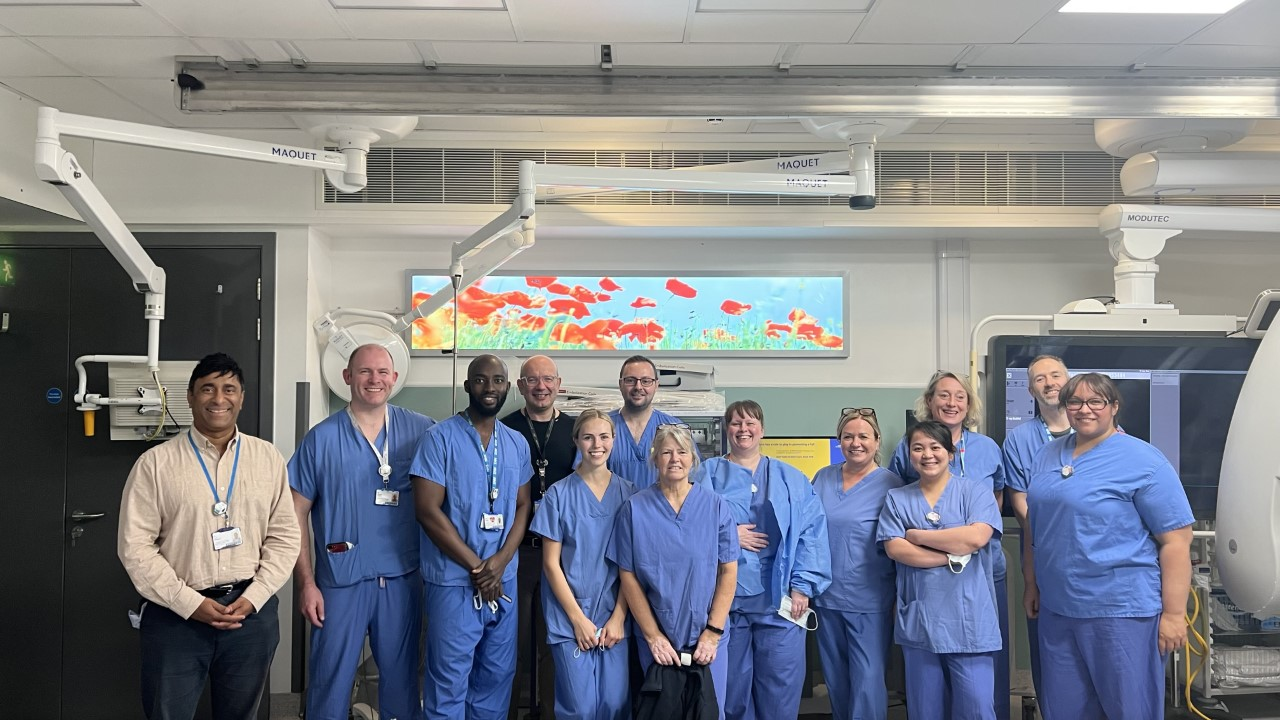 She was enjoying her fish and chips on the seafront at Bridlington when a seagull swooped and knocked them onto the ground.

But as Helen Corns, 84, returned to the chip shop for more, her family realised something was seriously wrong. Her face started to droop, her speech was slurred and her left side became weak.

Realising she was having a stroke, Mrs Corns’s family called an ambulance and she was rushed to Hull Royal Infirmary where an expert team of Interventional Radiologists performed a procedure known as ‘mechanical thrombectomy’ to restore her brain function and save her life.

Just one day later, Mrs Corns was well enough to continue her holiday after she was discharged from hospital with no lasting neurological damage.

Now back home in Scotland and able to walk her dog Max and go to her weekly exercise class, Mrs Corns said: “If I’d been taken to another hospital that didn’t do this procedure, maybe I wouldn’t have made it.

“But they were absolutely wonderful and I know how lucky I am.”

Dr Nejadhamzeeigilani said: “We are glad to see her improvement following the thrombectomy procedure and pleased to hear that she was able to continue with her holiday.”

Hull University Teaching Hospitals (HUTH) has been offering a Regional Mechanical Thrombectomy Service to patients since 2018 at its Comprehensive Stroke Centre, based at Hull Royal Infirmary.

Saturday marks World Stroke Awareness Day and HUTH is announcing it is now extending the service from 8am to 8pm, Monday to Friday, to help more patients.

Patients having strokes are “blue lighted” by ambulance from all over North and East Yorkshire and North Lincolnshire for minimally invasive Mechanical Thrombectomy in the Interventional Radiology Theatres. 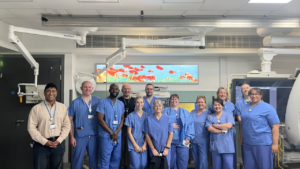 Performed under local anaesthesia or sedation, the Interventional Radiology team gains access to the blocked artery in the brain via a small puncture made in an artery in the groin or arm. Various devices known as guide wires, catheters, stent retrievers and suction devices are used to remove the blood clot and restore blood flow to the affected part of the brain thus enabling patients to recover mobility, speech and other faculties damaged by an acute ischaemic stroke.

Improvements can be so dramatic, Mechanical Thrombectomy has been called a “Lazarus procedure” because of its ability to reduce the risk of long-term disability or death.

Mrs Corns was on a caravan holiday to Filey with her daughter Aileen and son-in-law Alec when they decided to go to Bridlington for the day.

She said: “I didn’t even realise anything was wrong until they got me in a chair. I heard someone say they were calling for an ambulance and I remember thinking ‘What for?’

“I don’t remember arriving at the hospital but I remember them taking me upstairs and telling me what they were going to do.

“All I could think about was my brother, who we’d lost to a stroke just a year ago.

“But then, in no time at all, I was back on the ward, phoning the rest of my family to tell them I’d had a stroke. They couldn’t believe that I was talking fine to them, although I wasn’t allowed to get out of my bed at first.”

When she was well enough to be discharged from hospital the following day, Mrs Corns decided to continue her holiday to be with her family and is now back at home.

“There was something with my grip at first and I dropped a cup of coffee but I think I was just tired,” she said. “My head sometimes feels a bit heavy but it’s nothing.

“People can’t believe it when I tell them I’ve had a stroke.”

Dr Paul Maliakal, Consultant Interventional Neuroradiologist and Director of the Imaging Division at HUTH said the service, which initially ran from 8am to 5pm, Monday to Friday, is now being extended to 8am to 8pm, Monday to Friday, from today so the team can help even more people.

“Pioneering efforts from the interventional radiology team at HUTH has succeeded in training many more colleagues in this procedure.

“We are pleased to extend the service from 8am to 8pm, Monday to Friday , from October 3. This will enable us to treat many more suitable patients, reducing disability and death.”

Dr Maliakal said the long-term aim was to extend the service to weekends before rolling it out to 24/7.