A research team from Hull is taking part in an international study that investigates whether it’s possible to reduce the chance of babies becoming seriously unwell with Respiratory Syncytial Virus.

Commonly known as RSV, this common virus causes cold-like symptoms in older children and adults, but can cause inflammation in the lower airways (bronchiolitis) in babies, which makes them short of breath. They can also have difficulties feeding and develop a rattly cough and /or wheezing.

Many areas of the country saw a notable rise in RSV associated hospitalisations of babies and children last year, thought to be linked to restrictions put in place to limit the spread of Covid-19. Fewer infections in young people meant they were unable to build up as much immunity, leaving them more susceptible to viruses such as RSV, and this may still be the case to some extent this year.

In Hull, doctors normally expect to see over 130 children hospitalised with RSV each year during the winter months. 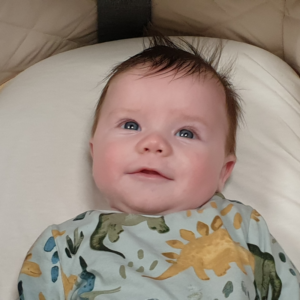 Baby Oscar is taking part in the HARMONIE study

Through the HARMONIE study, a dedicated paediatric research team from Hull University Teaching Hospitals NHS Trust is now assessing the benefits of giving a drug – called Nirsevimab – to healthy babies aged under 1 year during the winter, when RSV is most common.

One person who understands the importance of this research work is mum-of-two, Sophie.

In 2019, Sophie’s daughter Harriet was born at just 24 weeks and spent her first three months in hospital under the care of the neonatal team.

Baby Harriet then enjoyed a month at home with her family before being hospitalised again for a week after contracting RSV which led to bronchiolitis.

Now Sophie is keen for Harriet’s new baby brother Oscar, aged 10 weeks (pictured, right), to take part in the HARMONIE study in order to prevent other families going through the experience that her family shared.

“Harriet spent her first few months in the neonatal care unit. It was such a relief to finally get her home after all that time, so then to have her hospitalised again because of RSV a month later was just awful.

“When I heard about the HARMONIE study after having Oscar, I was keen to be involved. The requirements of the study are pretty straightforward and involve keeping an e-diary about Oscar’s health and progress, which I can do at a time to suit me, rather than having to attend clinic.

“If we can prevent just one family going through the upset and the worry that we did with Harriet, it will be well worth it.” 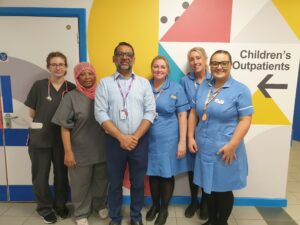 Dr Khan, the Principal Investigator for the HARMONIE study at Hull Women and Children’s Hospital, said:

“No parent wants to see their baby in hospital, to be dependent on oxygen, to require tube feeding or even intensive care. This study doesn’t just have the potential to prevent children from catching this nasty virus and becoming seriously ill, but it could also reduce the impact on families, save them unnecessary heartache, and reduce admissions to children’s wards during our busiest months of the year.

“Please, if you have a child aged under 12 months, consider taking part in the HARMONIE study. With your support and that of your little one, you could be helping many thousands of others like you in years to come.”

Hull University Teaching Hospitals NHS Trust is seeking to recruit a minimum of 50 participants in total, part of an international effort to recruit some 28,860 children to the study overall.

If you or anyone you know is interested in taking part in the study, please visit the HARMONIE website: https://www.rsvHARMONIEstudy.com/en-gb

Alternatively, if your child is aged under 12 months and you visit hospital regularly, please ask for details and a member of the paediatric research team at Hull Women and Children’s Hospital will be pleased to discuss the benefits of being involved in the study with you.