He saw the horrors of war with the eyes of a 17-year boy.

Just five months after passing out as a Royal Navy Sonar rating, Barrie Smith was sent to the Falkland Islands onboard HMS Alacrity after 600 Argentinian Commandos overpowered 57 Royal Marines on the islands they called “Islas Malvinas” to claim sovereignty.

Sent into battle repeatedly during the 74-day war between Britain and Argentina in 1982, Alacrity, a type 21 frigate, and her crew sunk an Argentinian supply ship, survived torpedo attacks and rescued survivors and bodies from the sinking Atlantic Conveyor. 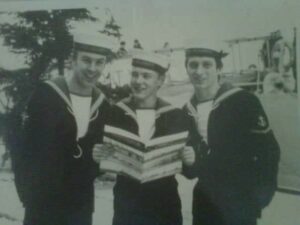 Barrie Smith, centre, with two of his naval friends

Now, Barrie, a clerical officer with the Hospital Discharge Liaison team at Hull Royal Infirmary, has been chosen as one of the Falklands veterans to take part in Remembrance events on the Falklands next month to mark the 40th anniversary of the conflict which claimed the lives of 255 British personnel.

When asked how he feels to have been chosen for the massive honour, memories and emotions overcome Barrie. “Pride,” he says, quietly.

The Falklands War began on April 2, 1982, with then Prime Minister Margaret Thatcher sending a naval task force of 127 ships, including HMS Alacrity, to the South Atlantic following the invasion. Altogether, 30,000 sailors, marines, soldiers, airmen and merchant mariners took part in the first military action since the Second World War to be fought by all sections of the Armed Forces.

The Task Force reached the Falklands on May 2, a month after the start of the invasion

Barrie, a sonar operator on the ship, remembers being sent to open fire on Port Stanley Airport in broad day light, coming under attack from Argentinian Mirage fighter jets, with only the quick thinking of Commander Christopher Craig to move the ship by feet saving them from disaster on that first day. Alacrity became known as “HMS Lucky”.

“Everybody was scared,” said Barrie. “But we hadn’t realise we were in a war until that particular day. Up until that point, we thought we’d be heading down there but they’d move off the island when they saw what was coming.

“They didn’t. They dug themselves in.” 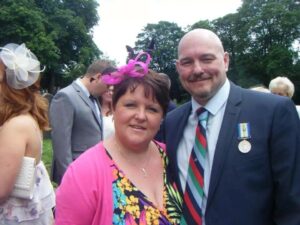 Over the coming weeks, Barrie, who also manned the 20mm anti-aircraft guns, and the rest of the crew found themselves in the thick of it.

They were sent on missions in and out of the Falkland Sound, dropping off SAS and checking for mines. It was only years later, when his father read a book about the ship, that Barrie discovered they’d been fired on by an Argentinian submarine, two torpedoes just missing them.

He was on the bridge when his ship fired on the ARA Isla de los Estados on May 11, igniting her jet fuel and ammunition cargo with seven hits. Only two men of the 24-crew survived.

“One of the big things I remember is my friend went in the water to pull this bloke out and we were on the ropes to help. The bloke turned to our friend, said something and just died. It was horrific.”

Eventually, after long and deadly battles, the island’s capital Stanley was surrounded by British, forcing the Argentinians to surrender on June 14, 1982.

Barrie was due to take part in the Remembrance Sunday parade in London this year as part of the Falklands 40 commemorations but was chosen by the Royal British Legion to fly to the Falkland Islands for their own special services.

He and wife Julie, who works in the control room at Castle Hill, will take the 19-hour flight to the islands, staying with a host family, and joining in official visits to Bluff Cove and Goose Green, scenes of some of fiercest fighting.

On November 11, the British party will lay wreaths at the islands’ Cenotaph before a Poppy Day Dinner with invited dignitaries.

Barrie will take time out to lay crosses at the memorials of both the Atlantic Conveyor and the Isla de los Estadoes, remembering the young lives lost on all sides.

After the official parade for Remembrance Sunday on November 13, Barrie and his wife and the rest of the veterans’ party will attend an official reception at the Governor’s Residence before the flight home.

“I do feel pride to be chosen,” he said. “But I hope, too, that it will help clear away some of the ghosts. So many of us have post-traumatic stress disorder but I still see most of my friends at reunions every year and we are always there for each other.”