A man who spent seven years in a refugee camp before becoming a nurse at Castle Hill Hospital has shared his experience with children from an East Yorkshire primary school.

Justin Mwange fled to Zambia with his family from the war-torn Democratic Republic of Congo and spent seven years living without hope before he was granted refugee status and moved to Hull.

Now, after qualifying as a nurse this summer and joining Hull University Teaching Hospitals NHS Trust, Justin has gone to Newport Primary near Brough to share his experiences with Years 4 and 5. 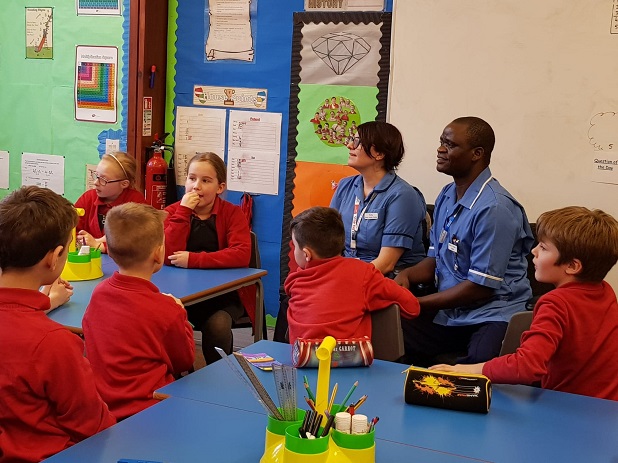 Justin said: “I was very pleased to go to the school and tell the children about what it was like to go to school in Congo. We would walk 15 miles there and back to school every day and we’d to work to pay for all our books and even our pencils.

“They were interested to learn about my time in the camp and I was able to tell them why I wanted to become a nurse.”

Teacher Carolyn Ashley got in touch with the hospital trust to pass on the children’s letters and a visit was arranged for Justin and Vicky Needler, Practice Learning Facilitator so he could share his story.

Justin wanted to become a nurse after watching people die by the side of the road because of the lack of basic health care as his family and neighbours walked for three days in searing temperatures to flee the war tearing his country apart.

During his years in the refugee camp, Justin volunteered as a support worker with Medecins Sans Frontieres helping people with malnutrition.

Although fluent in French and Swahili, he spoke little English when he arrived in the country with his wife Elizabeth Nyota in 2007 as part of a refugee resettlement programme. He moved to Hull where he started English classes and took a job working in a factory to provide for his family. 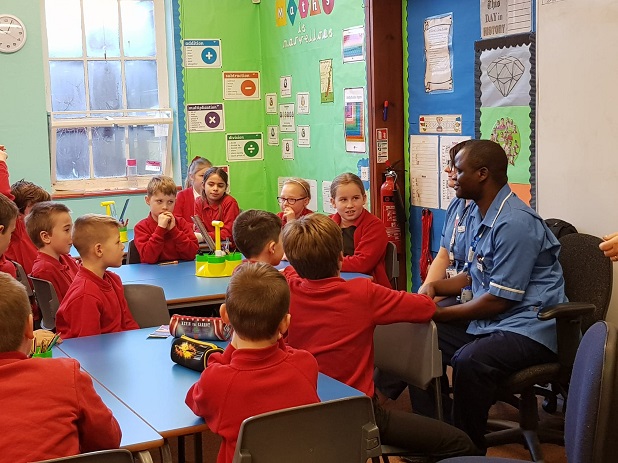 He completed English as a Foreign Language programme at the University of Hull before applying to study social work and graduated in 2012. He then enrolled at the university to study nursing in 2016 and gained a first in his Bachelor of Science nursing degree this summer.

He now works on Ward 10 at Castle Hill, looking after patients with colorectal conditions and digestive problems.

Teacher Carolyn Ashley said: “We have been working on a project about peace, conflict and rights this year and one of the subjects we were looking at involved refugees.

“We then saw Justin’s story and the children decided to write him letters.

“It was a privilege to meet Justin and we’re so pleased he was able to come and meet the children.”