They are the patients who thought they had run out of options to tackle their breathlessness, chest pain, fainting and dizziness.

But now, patients with heart disease are being offered the chance of improved health and a better quality of life at Hull University Teaching Hospitals NHS Trust.

The trust has become the third centre in Yorkshire and the Humber to perform Transcatheter Aortic Valve Implantation (TAVI) for patients who were previously considered too frail or unwell to undergo major heart surgery.

Dr Raj Chelliah, the Interventional Cardiologist who is the trust’s TAVI lead, said: “In the past, patients in Hull, the East Riding, North Yorkshire and Northern Lincolnshire had to travel around two hours or more to either Sheffield or Leeds if they were considered suitable for the treatment.

“Now, we can offer them this life-changing procedure much closer to home.

“It is making a huge difference to patients with aortic valve disease who were not considered suitable for major heart surgery.” 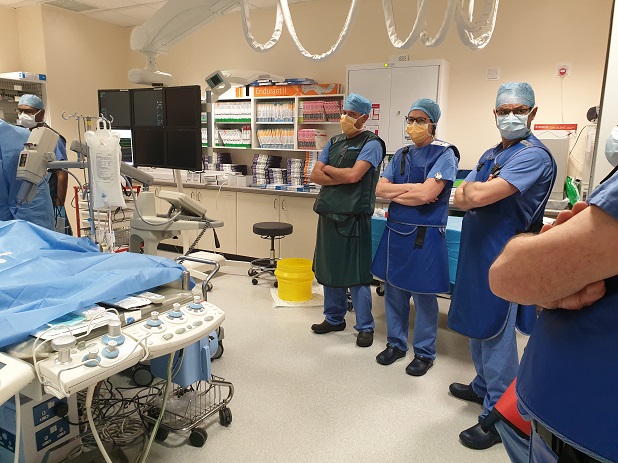 This month, the second list got underway at the Centre for Cadiology and Cardiothoracic Surgery following the success launch of TAVI in March.

The patient in their 80s is wheeled into the Cath Lab at the centre based at Castle Hill Hospital. Their anxiety is obvious and understandable.

But, surrounded by the anaesthetist and the friendly, dedicated and highly skilled Cath Lab Team, they are reassured and comforted until they fall under.

Theatre Nurses, Operating Department Practitioners and support staff under the guidance of Senior Sister Claire Bradley prepare for the procedure while the Radiographers get in position and the Interventional Cardiologists get scrubbed and gowned.

Anaesthesia takes around an hour and there are plans for Hull to follow the other centres in offering conscious sedation, which could see the procedure performed under local anaesthetic. This will mean less impact on the patient as well as the potential for more patients to be put on the list because of the procedure could be performed more quickly.

We’re given heavy wraparound lead aprons and gilets to wear over our scrubs to protect us from the continuous x-rays carried out while the patient is moved from the trolley onto the operating table to give the surgeons a view of what they’re doing on giant screens. 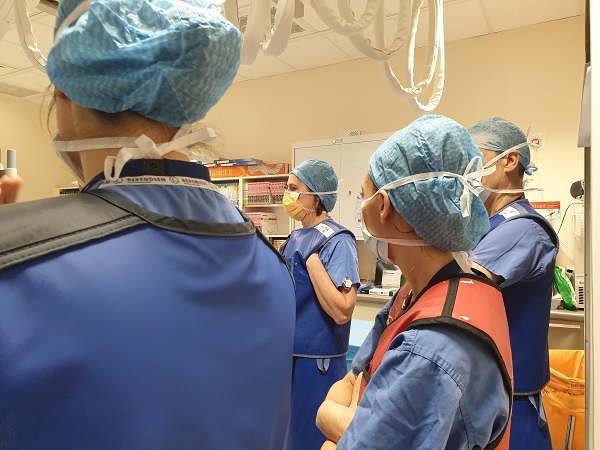 Dr Chelliah, assisted by Dr Joseph John and Dr Ben Davison, take up their positions as the patient is prepared for surgery.

In TAVI, a catheter or hollow tube with a balloon on the tip is inserted through arteries in the patient’s groin. The catheter is then passed into the heart and is positioned near the opening of the aortic valve.

The balloon is inflated to create space for a new tissue valve, which is then put in position and expanded, with the redundant and diseased value pushed out to the side.

But before one surgical instrument is lifted, the team fall silent for the WHO surgical check list, with all the patient’s details, allergies and condition checked and confirmed by everyone in the room, regardless of their job title.

And then we begin. Incisions are made in the patient’s groin while pacing wires and markers are inserted to guide the surgical team.

In the corner, a huge box is opened. It contains the TAVI delivery system, a complex network of tubes and wires which will be fed through the patient’s arteries to put the valve in place.

The 26mm valve has been selected specifically for this patient to prevent leaks. Looking at it encased in wire mesh on a table, it’s hard to imagine how it will ever end up in place, given the narrowness of the catheter. But then the magic begins.

The valve can be reshaped by cold water so it is placed in a trough containing two litres of ice-cold water before it is crimped into the delivery system and handed over to the surgical team.

Then, under the watchful eye of a surgical proctor assigned to guide and support our staff through the early days of TAVI, Dr Chelliah and Dr John feed the catheter through the patient’s artery with dexterity and skills, following the instructions of “half a turn” or “quarter of a turn”.

These are movements of tenths of millimetres but you’d never know the pressure these doctors are under as they go about their business. It is humbling.

Within half an hour, the valve is inflated and in place, the delivery system is removed and the closure work begins to stitch up the patient’s arteries. But the pressure isn’t off, as there’s a risk of severe bleeding and complications around the insertion sites.

Not today. It all goes to plan and in a matter of minutes, the patient is ready to be wheeled to recovery.

TAVI nurse Alan Fussey has watched the entire procedure but, really, his role is getting the patient to this point and looking after them once it’s over. He’s in theatre as the patient’s advocate. He’s built up a relationship with them over the weeks and months and he’s with them now.

He works in the clinic alongside Dr Chelliah, helping to identify patients who may be suitable for the procedure.

For those too frail or sick for major heart surgery, TAVI can be an option as the procedure puts less strain on the body because the heart does not need to be stopped and placed on bypass. It also avoids people having a large cut on their chests and can mean people recover more quickly than if they had undergone conventional surgery.

Alan said: “Patients are referred to Dr Chelliah and I go into clinic with him to discuss with the patient their suitability for TAVI.

“These patients have been turned down for surgery so TAVI is the only option. We then carry out investigations, arranging ECHOs and CT scans and, once they’re considered suitable, they are added to the list.”

Sometimes, it doesn’t work out as everyone has hoped and the tests show the patient isn’t suitable for TAVI. “It’s seen as a ‘last chance’ so, sometimes, we have to tell them that the last chance isn’t an option for them and that can be very hard to hear.”

But as the patient is wheeled out of the Cath Lab and into recovery, it’s been a success.

Then, hopefully within days, they’ll be well enough to go home to a new life, able to once more lead a life they may have thought was over.