Hull Women and Children’s Hospital became the first in the world to offer VR headsets to around 400 prospective parents so they can see what it’s like to use a birthing pool in the midwifery-led unit or a birthing ball in the labour ward.

As well as using the headsets to tour the Fatima Allam Birth Centre, women who know they’re having a caesarean section are offered the opportunity to see inside an operating theatre before coming into hospital. 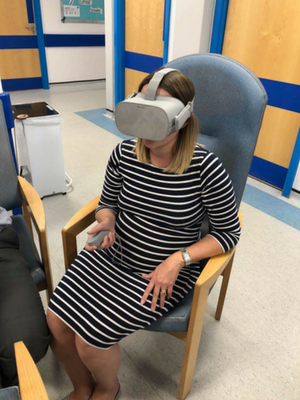 Now, midwives and Hull Institute of Learning and Simulation (HILS) have won “Use of Technology” at a British Journal of Midwifery ceremony in Leeds.

Head of Midwifery Janet Cairns said: “Our use of technology is allowing women to become familiar with their surroundings, know who could be there with them when they go into labour and what they might expect during labour and birth.

“Our midwifery team worked with HILS on the project and this award is fantastic recognition of what can be achieved through innovative thinking, dedication and teamwork.”

The midwifery team worked with HILS, based in the Clinical Skills building at Hull Royal Infirmary, to record 360-degree footage for the VR headsets.

Prospective parents have been road-testing the headsets at the HEY Baby Carousel events, with the next one taking place on Wednesday, February 27, between 6pm and 8pm.

Janet Cairns said: “Wearing the headsets is like being in the room. People are able to see all around them and watch midwives interacting with mothers and partners during labour.

“We’ve got a video tour of the hospital so people can familiarise themselves with their surroundings before they come in but the headsets take it to a different level.

“We’re giving prospective parents as much information in as many different formats as we can so they can make choices that are right for them and their babies.”

HILS Senior Technician Chris Gay said: “The feedback we’ve had from parents so far has been really positive, with more than 90 per cent reporting the experience helped them feel better prepared for their birth of their babies.

“We’re now looking at how we can expand the project to shape the services we provide in the future.”