A couple will celebrate their first Christmas with their baby boy tomorrow after he was delivered by the midwife who helped them when their daughter was stillborn.

Tanya Antcliff, 30, and Luke Sellers, 31, were devastated when their daughter Imogen died in the womb hours before she was born at Hull Women and Children’s Hospital.

Specialist Bereavement Midwife Sue Cooper supported them through the agony of Imogen’s death, keeping in touch and visiting them at their home in East Hull before Tanya discovered she was pregnant again.

Sue helped them throughout Tanya’s pregnancy and then came into hospital in the middle of the night to deliver their son Ronnie in June this year. 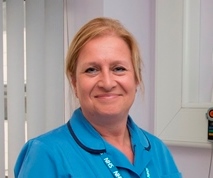 Tanya said: “Sue was absolutely brilliant. She told us we could contact her at any time and the really nice thing was that she came into hospital about 3 or 4 o’clock in the morning to be with us and deliver Ronnie.

Tanya had a normal pregnancy and all checks at her 40-week appointment were normal.

She went into labour two days later but midwives couldn’t find Imogen’s heartbeat and the couple discovered their daughter had died.

Tanya is thought to have suffered severe placental abruption at the end of her pregnancy which halted the flow of oxygen to Imogen, causing her baby to die.

“It was just the worst thing,” said Tanya. “It was the worst time of our lives.”

Hull University Teaching Hospitals NHS Trust was one of the first 11 trusts selected to pilot the National Bereavement Care Pathway in 2017 to support families through the deaths of babies during pregnancy, labour or shortly after birth.

Sue met Tanya, a sales assistant, and Luke, a joiner, within hours of them losing Imogen on March 8, 2017.

“It was a bit of a blur at the time but Sue introduced herself while we were in hospital and then kept in touch with us,” said Tanya.

“I got really bad anxiety afterwards and she was great, coming round to see me and Luke. We wouldn’t have got through it without her.”

The couple were overcome with joy and anxiety when they discovered Tanya was pregnant for the second time six months after Imogen’s death.

“Sue had already told me she’d be there for us if we decided to have another baby and she was,” said Tanya. “I felt really safe with her.

“I didn’t enjoy my pregnancy and I don’t think I ever will, even if I get pregnant again, because I had gone full-term and still lost her.

“People forget that men go through this too and Sue was there for Luke too because he was just as scared as I was.”

Sue was constantly at the end of the phone if either Luke or Tanya had any concerns and she was able to reassure Tanya by letting her hear her baby’s heartbeak whenever she wanted.

Tanya was on medication throughout her pregnancy to prevent a repeat of any problems with her placenta and was due to be induced at 37 weeks. However, her anxiety grew as her due date approached and she was induced at 36 weeks.

Ronnie arrived in the world on June 1, delivered by Sue and weighing 7lb, the same as Imogen.

Now almost seven months old, Ronnie is a healthy baby boy and the couple will toast their friendship with Sue over Christmas.

Tanya said: “Of course we’ll be thinking of Imogen but we’ve got Ronnie and it’s all turned out good in the end.

“We still keep in touch with Sue, sending pictures and letting her know what Ronnie’s doing now.

“I think we will always keep in touch with her.”

Sue was joined by second Specialist Bereavement Midwife Sarah Green, expanding the service to 45 hours a week. All trust midwives are also undergoing specialist training in helping families who lose their babies.

Sue said: “Losing a baby is a terrible experience for any parent and something no one should ever have to go through. But it’s important that we have support in place to help when the worst does happen.

“As Specialist Bereavement Midwives, you meet couples at the worst times of their lives. It was an honour to be with Tanya and Luke after Imogen’s death and to be with them when Ronnie was born.

“I would like to wish them all a very Happy Christmas.”