A mum has praised staff at Hull Women and Children’s Hospital after the birth of her second baby turned into a life-threatening emergency.

Louise Sample, 33, had to undergo emergency surgery following the birth of her son Robbie by caesarean section.

Baby Robbie then faced his own battle after developing a serious infection which doctors feared could have been meningitis.

Louise and husband Kevin, 38, were finally able to take Robbie home to Sutton Park after almost a week in the care of staff at Hull Women and Children’s Hospital. 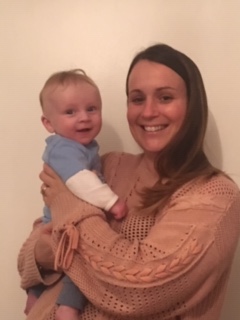 Today, as they prepare to spend their first Christmas as a family of four, Louise and Kevin have thanked the medical, theatre and midwifery team for looking after them.

Louise said: “It wasn’t quite the start we had expected but the staff just couldn’t do enough for us.

“They did everything they could to help us and it made such a difference.”

Louise had the couple’s first child Annabelle by emergency caesarean section five years earlier and required a second emergency section when Robbie was born in August. Complications during surgery meant that Louise had to spend longer in hospital than either of them had anticipated.

Kevin was able to stay by Louise’s bedside to help his wife look after Robbie after Hull University Teaching Hospitals NHS Trust introduced a new initiative earlier this year to enable partners to stay overnight.

“I ended up being there for almost a week and I was lucky because Kevin could stay with me,” Louise said.

“Staff on the ward was all so good, anyway, but it made a difference being able to have him with me because I couldn’t move out of the bed.”

As she began her own recovery, staff realised Robbie had an infection and he needed a lumber puncture when he was just two days old. He was then put on a course of intravenous antibiotics while tests for meningitis were carried out.

Although the tests came back negative, Robbie had to stay in hospital until the course was complete.

Louise said: “It was difficult for Annabelle because we were in the hospital for so long and we were keen to get home. Staff made sure we were able to be discharged as soon as Robbie had finished his final antibiotics.

“They were just brilliant.”

Although Louise had to return to hospital for further treatment to help the healing process, she had since made a full recovery and is looking forward to Christmas with her family.

“We are so grateful to all the staff that looked after us in the hospital,” she said. “It didn’t go how we’d imagined it would but it all worked out and Robbie is just perfect.”

“We will always do what we can to accommodate families who come into our care and, on behalf of all the team here at Hull Women and Children’s Hospital, we’d like to wish them all a very happy Christmas.”