A young man who undergoes surgery every two months has thanked hospital staff for looking after him.

Mitchell Carroll was just two when he was diagnosed with the disorder which causes warts to grow on his voice box.

Now 20, Mitchell travels from his home in Bransholme to Castle Hill Hospital’s Day Surgery (Daisy) Unit to undergo surgery to trim the growths every six to eight weeks.

He said: “Every time I go in, the staff make me feel so welcome. They’re just so lovely.

“It might not be great because I have to go there for an operation but they’re definitely great people.” 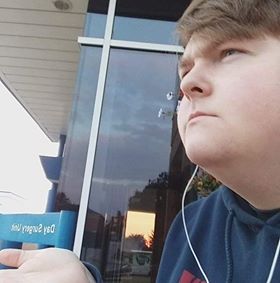 Mitchell has Recurrent Respiratory Papillomatosis, a rare disorder causing small, wart-like growths to form in his respiratory tract. It can also cause hoarseness, a chronic cough, shortness of breath or difficulty breathing and problems swallowing.

Although the growths known as papillomas are benign, they can cause severe obstruction of the airways and respiratory complications unless they are removed.

When he was first diagnosed, Mitchell went to the Day Surgery Unit at Hull Royal Infirmary to have the growths trimmed to help relieve some of the obstruction in his airways.

However, since the age of 15, Mitchell has attended the Day Surgery Unit at Castle Hill Hospital in Cottingham every six to eight weeks to have the procedure carried out under general anaesthetic.

He said: “I’ve gotten to know the staff really well because I go so often.

“I usually get to the unit as soon as the doors open and get seen as quickly as possible to get my paperwork done.

“I go under general anaesthetic but the procedure takes between 30 minutes and an hour. Because I’ve been going there that long, I can come round from the anaesthetic pretty quickly and then I go into the discharge room.

“I’m only there to make sure I can swallow properly and then I’m discharged.

“It’s really simple for me and the staff know me really well now. I just want to thank them for what they do for me and say keep doing what you’re doing.”

Staff nurse Kimi Gordon, who works on the unit, said: “Mitchell, or Mitch as he’s known to us, is such a character and he’s been coming to us for a long time.

“He knows the routine so well he could do everything for us and he’s really popular with all the staff in the unit.

“It’s always great to see him and we’d like to thank him for the nice things he’s said about us.”