One of England’s first hospital housekeepers has vowed to keep on working for the NHS after celebrating her 70th birthday.

Jeanette Robinson became only the third hospital housekeeper at Hull Royal Infirmary when the trust introduced the vital role in November 2001.

Now, after celebrating her 70th birthday in the same year as the NHS marked the milestone in its history, Jeanette insists she’s staying on Ward 12 at Hull Royal Infirmary.

She said: “My family always ask me when I’m going to cut my hours back but I tell them I’ll do it when I’m ready and I’m not ready yet.

“It’s the best job I’ve ever had and I couldn’t be in a happier environment. We’re a great team and this is the job if people are looking for something that can make a real difference to patients.”

Clinical Support Worker Lesley Gorcik, who has worked with Jeanette for 13 years, said: “She is just the most helpful person you will ever meet. She goes out of her way to help people and it’s always above and beyond.

“She’s so cheerful every time she comes on the ward. The patients absolutely love her.

“She helps all our volunteers and is such a help to us all. She’s a credit to the ward.”

Hull was chosen by the Department of Health as one of three reference sites in the country after the successful launch of housekeepers. 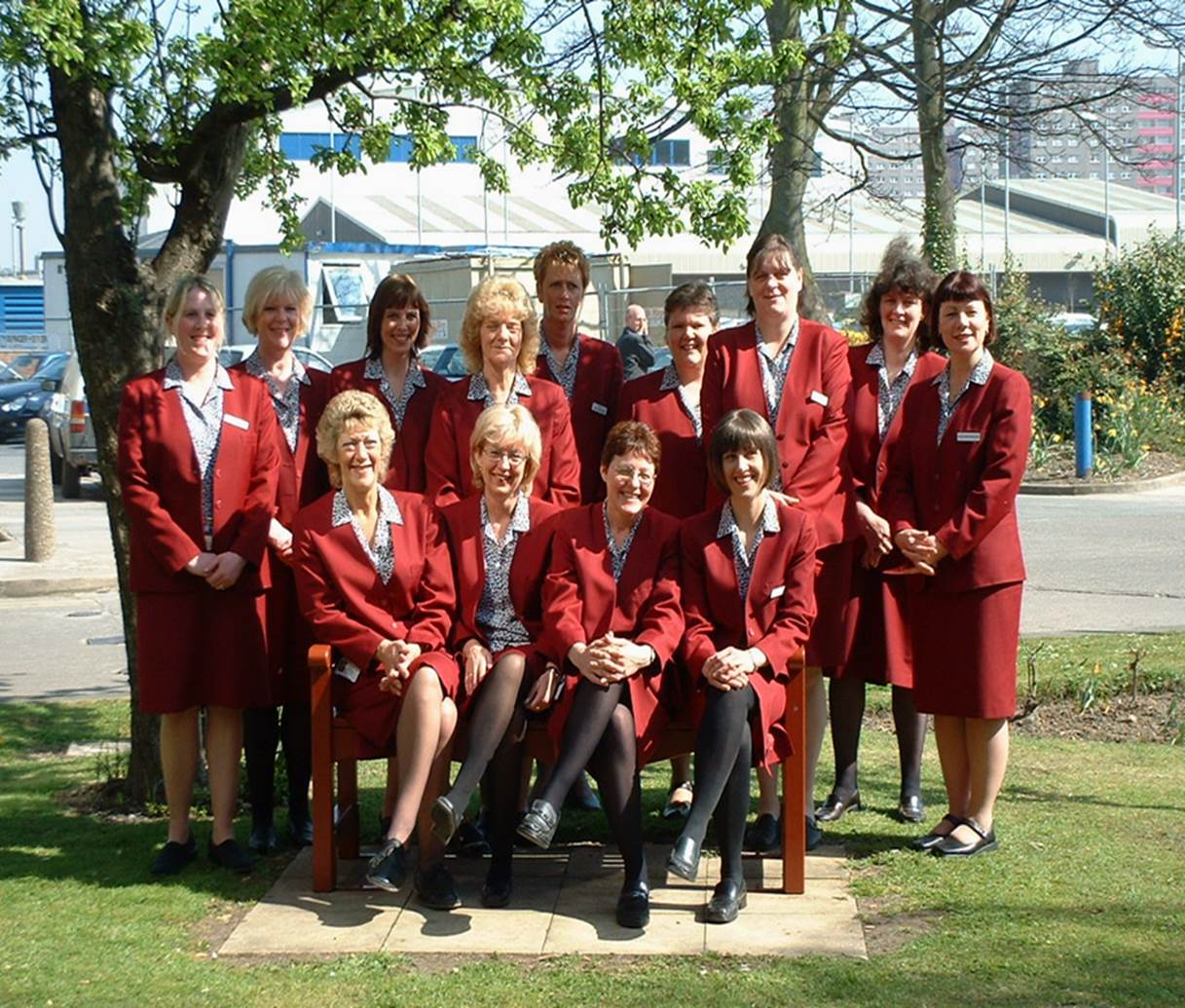 Jeanette, (back row, fourth from left) with some of the trust’s first housekeepers in 2002

House-keepers focus on food, cleaning and maintenance to ensure basics of care are in place for every patient, freeing up nursing staff to provide essential patient care.

Evaluation studies have found that the introduction of housekeepers means nurses and health care assistants have more time with patients, improving morale and job satisfaction among the nursing workforce.

Jeanette, who has three children, joined the NHS 46 years ago, working as a domestic based mainly in the surgical block at Castle Hill Hospital.

She was asked to take on the responsibility of domestic supervisor and remembers heading out on “mop runs” at 5am, collecting dirty mops from Hedon Road Maternity Hospital, Kingston General and Hull Royal Infirmary and collecting fresh ones from Princess Royal Hospital.

She was then promoted to a manager’s role, where she worked hard balancing her new responsibilities alongside her desire to keep working alongside her team on the ground.

“I’m a people person and although I got a lot of support from the people around me, it was the loneliest job for me because I was in an office and not out with people,” she said.

“I was working very long hours and not seeing my family and I decided it was time for me to step down.”

When hospital bosses heard Jeanette was thinking about leaving her role, they lined up an interview for Jeanette in one of the new housekeeper roles. She was immediately offered the job and started a fortnight later.

She worked on the orthopaedics ward originally on Ward 9 in the tower block, although the 28-bedded unit was moved to Ward 12 around three years ago, still caring for patients suffering major trauma injuries or with orthopaedic conditions.

Starting at 7am each morning, Jeanette checks in with patients at the start of each shift, ensuring everyone has fresh, iced water by their beds and making sure they have had a comfortable night.

She then takes round toast while catering staff offer patients cereal, making sure the ward is shipshape and patients have everything they need.

She goes round with hot drinks and milk shakes, cakes and biscuits twice a day to make sure patients who require extra calories to rebuild their strength have all they need.

Working alongside nursing staff and the ward clerk, Jeanette helps to ensure the ward runs as smoothly as possible, with patients’ care plans, paperwork and cleaning tasks carried out and in place.

Jeanette said: “It’s a great job and different parts have been added over the years but all for the better. It all works together to make sure the ward runs like it’s supposed to run.

“We’ve got a fantastic team here, from the matron and consultants down to the domestics, and there isn’t one person I could say I couldn’t work with.

“I never get fed-up helping people and I know in this job you can make a difference to someone else.”