A grandmother has been fitted with a Batman-style prosthesis to help her twin grandsons overcome their fear of her false leg.

Mary Monahan, 66, was attending a routine appointment at Hull’s Artificial Limb Unit and mentioned to Prosthetist Jess Gilroy that her grandsons Toby and Finlay were frightened of her prosthesis.

Now, with Jess’s help, Mrs Monahan is the proud owner of a Batman prosthesis, designed by the team in Sykes Street from a pair of Batman leggings.

Mrs Monahan said: “The boys were just transfixed by Granny’s new leg and now we play special games they’ve devised using my leg when they come to visit.

“I’m just so impressed by what Jess did for me. Hull has a really lovely centre and they do such a good job. The atmosphere is great and the staff are all so nice.

“I can’t thank them enough, really.” 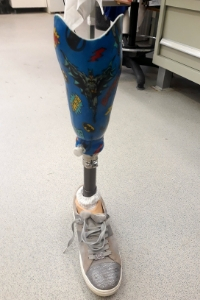 Mrs Monahan had her left leg amputated to mid-calf when she was just three years old after she was born with a congenital defect in her foot. She has always worn a prosthesis, only removing it at bedtime.

Although her own children had no issues, she realised Toby and Finlay, now four, were frightened of the prosthesis when she moved to the East Riding from the Isle of Man to be closer to them as they grew up.

She said: “For some reason, Toby and Finlay were very frightened of the leg and whenever they saw it, they were just aghast and I had to put it away.

“I tried calling it my ‘special leg’ or my ‘funny leg’ but they were just so spooked by the sight of it.

“I’d gone to the centre to get my spare leg adjusted and I was chatting to Jess and just mentioned the boys’ reaction to her. She suggested we could look at putting a special cover on it and I thought it was a great idea.”

With both boys Superhero fans, Mrs Monahan opted for a Batman leg and bought a pair of leggings featuring the character for the team to use.

Once the leg had been created, Mrs Monahan met her grandsons for a family get-together in the pub. 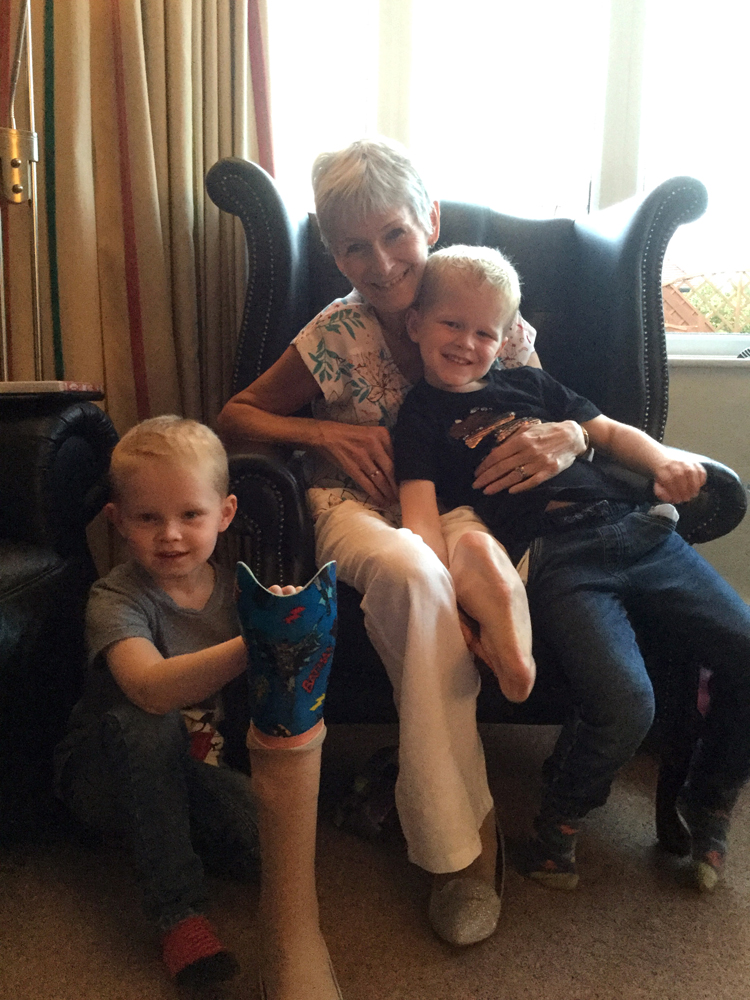 “I told Toby I’d a secret and asked him to get under the table and pulled up my trouser leg. He was utterly transfixed. Finlay then got a look at it.

“We went out into the garden so they could have a proper look and since then, their attitude to the prosthesis and to my stump has just changed completely.

“When they come and stay her, we play this new game of their own devising which involves them both taking off Granny’s leg, having a jolly good look and feel of my stump. I then have to go to bed where they are doctors in the hospital and they explain they’re going to have to cut my foot off and attack it with their swords.

“They then get to put on the Batman leg. And, of course, they like to try it on themselves and pretend they’ve got three legs.”

Jess Gilroy, who has worked with the service for 12 months, said the team in the centre’s workshop had designed special covers for laminated sockets on artificial limbs including unicorns and Spider Man by using fabric, carbon fibre and resin.

She said: “It makes a difference to people. Some are happy with natural skin colour but others think a special design makes it feel a bit more like their own.

“I was glad to help Mary and she’s the only one with a Batman socket.”