She appears on the ward mid-afternoon, bunting draped over a trolley loaded with brightly coloured plates and trays.

Sandwiches, cut into delicate triangles, a rainbow of fresh fruit, milkshakes, chocolate mousse and cheesecake create a mouth-watering feast. There’s even a cheese board, with the option of hard or soft cheese to enjoy with your crackers.

Since her appointment in January, Ward 70 has seen its fundamental nursing standard for nutrition improve from red to green in the most recent audit.

“I never got told I was good at anything,” Michelle said. “But since I’ve been doing this, people have been saying ‘Wow’.

“I just really love it. I can see how it is helping patients get better and back home sooner.” 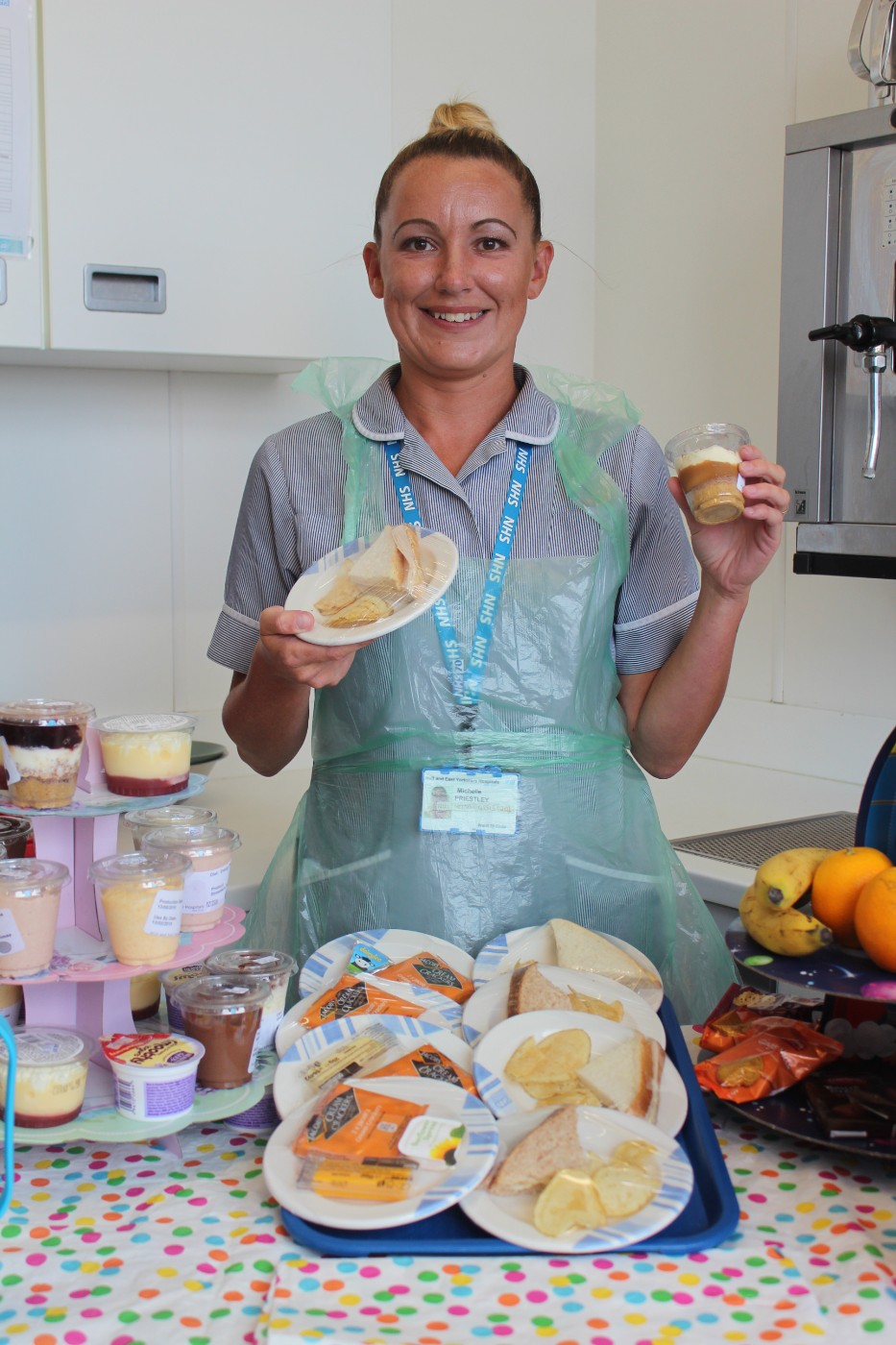 Michelle, 35, originally worked as a porter for almost nine years before leaving to bring up her three children.

Although she got a job in Asda, she wanted to return to the trust and applied in vain for every vacancy she thought might be suitable.

However, in January 2017, she was taken on as a health care assistant helping out on the winter ward, a temporary post for four months.

“It was a bit of a risk to take the job,” she said. “I was giving up a permanent job for a temporary one but I worked really hard and was offered a permanent post at the end.”

A year later, Michelle was asked to take on the role of ward nutritionist, helping to improve Ward 70’s performance in the fundamental standards introduced by Chief Nurse Mike Wright. Michelle leapt at the chance.

Eight months on, the difference Michelle has made to patient care, alongside the passion she has for the role, is obvious, not least because the last audit saw the ward scoring green in the fundamental standard.

It’s approaching 8am and Michelle is an hour into her shift. She’s been in patient handover so she knows who is on the ward and who needs what.

Those with special nutritional needs have red trays and water jugs with red lids, an instant guide for staff. But Michelle also has her special white board.

She’s filling it in on the kitchen wall, marking essential information next to each patient’s name to help catering staff. The woman in that bay needs encouragement to eat, the man in the bay across the way likes big portions. No sugar for that patient because he’s diabetic.

You can see how this plays a part in patient safety and Michelle takes great care to ensure the board is accurate and up-to-date.

She loads up the toaster and stacks the slices on the plate covered by a napkin to keep them warm before heading out onto the ward. 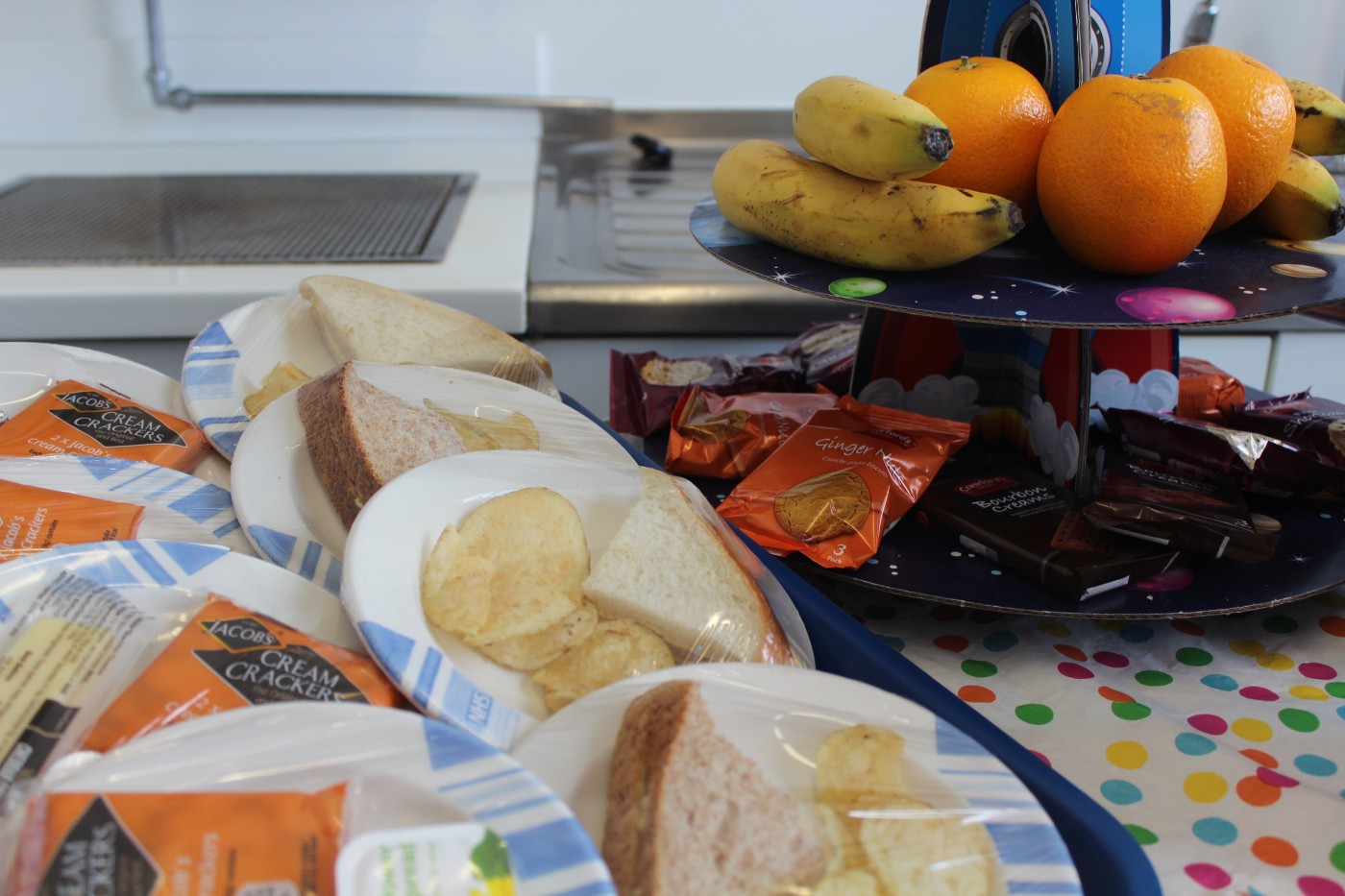 Some of the patients on Ward 70, a general medical ward for diabetes and endocrinology complaints, have been here for a while. One has been here for 100 days and he’s lost a huge amount of weight. He’s Michelle’s “special project”, a man in danger of malnutrition, and she endeavours to tempt his palate every day, just to get him to eat something.

“This man is just fed up with the food because, every two weeks, it goes back to the same thing. I try to see what he would like. I do that with all the patients who say they don’t want to eat anything.”

She goes into his room. He’ll have two triangles of toast, he says. “Three?” asks Michelle. “Oh, go on then,” he says with a smile.

Michelle scours the different menus available in the trust every day, from the gluten-free diets to special diets for patients with kidney problems, to see if there’s anything she can source to tempt patients’ appetite. She even looks for children’s meals, offering plainer food like fish fingers and bangers and mash to older palates not tempted by macaroni Provencal or pasta carbonara.

“I use smaller plates for some patients so they’re not overwhelmed by the amount of food before them,” she says. “Sometimes, they won’t have a full sandwich but they might have a quarter.”

With meticulous attention to detail, Michelle records every drink and every mouthful of food a patient has, essential information for the dieticians, speech therapists and even the doctors.

“Staff nurses fill in the notes that the patient is eating and drinking well but I provide that precise and detailed information which I hope can help,” she says. “The SLT team say I’m good at knowing which patient is likely to require pureed meals now. When I think they’ll agree, I make sure I order in a pureed meal so it’s there for them in the freezer.”

She opens a cupboard to reveal her secret crisp stash. She can also obtain Mars Bars, taking the trouble to chop them up into tiny, bite-size pieces to help a patient improve their calorie intake. It’s all on the afternoon tea trolley.

Despite the pressures on her time during her 7am to 3pm shift, five days a week, Michelle always has time for her patients. A friendly and familiar face on the ward, they greet her by name. They are always pleased to see her.

“It’s hard because sometimes you can be on your knees but then I just think they’re the ones in the hospital bed so it’s for us to put a smile on our face,” she said.

One patient, who has been on the ward for one month, accepts the offer of toast. Michelle knows he’s got a healthy appetite so she makes sure he always has large portions.

“You can tell when she’s not working, especially at the weekend,” he says. “She makes a difference, that’s for sure.”

Michelle takes the orders for the lunches and dinners but her hours mean she’s often asking people with poor appetites what they want for their lunch the next day, seconds after they’ve struggled through that day’s offering.

“I know it’s off-putting for them and I hate doing that,” says Michelle. “As there is only me doing the role at the moment, I like to get the orders in and away before I finish.”

It’s the individualised care Michelle offers that is improving patient care on Ward 70. Not only is she familiar with her patients’ requirements, Michelle sits by their bedside, taking the time and trouble to coax them with every forkful. Sometimes, she works with four patients at a time, flitting from one bed to the next then back again.

As well as providing the nutritional shakes which build up frailer patients, Michelle has used the outside world as her inspiration for her famous afternoon tea trolley.

“I took my Nanna to Morrison’s one day and I saw how the older people seemed to love a smaller sandwich with a few crisps on their plates,” she said. “I thought I’d do that and people seem to like it.”