People are risking cancer by failing to realise the damage they can cause to their skin while Britain basks in the current heat wave, a hospital specialist is warning.

Professor Walton said: “I tell people that even if they are crossing the road to go to the shop, they should apply sunscreen before they go outside.

“They know when they go abroad that they need to take sun cream but they think, wrongly, that a little bit of sun we get at home is ok when it’s not’.

“In fact, what you should do at home and abroad is avoid the sun between 11am and 3pm and  wear  sunscreen.

“Even getting sunburnt once is enough to damage your skin. Sunburn is a clear sign that the DNA in your skin cells has been damaged by too much UV radiation.

“Getting sunburnt, just once every two years, can triple your risk of melanoma skin cancer. Too much UV radiation from the sun or sunbeds can damage the genetic material (DNA) in your skin cells.

“If enough DNA damage builds up over time, it can cause cells to start growing out of control, which can lead to skin cancer.”

With the heat wave expected to continue for the next few weeks, Prof Walton, who is also an Honorary Professor at Hull York Medical School, has shared her knowledge and tips for keeping safe in the sun.

Tell me about skin cancer

Malignant melanoma is cancer of the pigment cells of the skin. If treated early, the outlook is good. However, if untreated, the disease can spread to the lungs, liver and lymph nodes.

Squamous cell carcinoma (SCC) is a non-melanoma skin cancer which can be found on any area of the body although it’s more common on areas exposed to the sun such as head, neck, lips, ears and back of hands. It can be treated if detected early but has the potential to spread to other areas, causing pain and serious illness.

Another non-melanoma skin cancer, BCC is the most common type of skin cancer and is often called “rodent ulcer”.

It often appear as a scab that bleeds and does not heal completely. It can also look like a scaly red flat mark or with a pearl like rim around a central crater which can cause an ulcer if untreated.

It can be treated in almost every case although it’s harder if left untreated for a long time or if located  in a difficult place such as near the eye, nose or ear. It rarely spread to other parts of the body.

Now I know what it is, what are my chances of getting it?

Cancer Research UK says one in 54 people will be diagnosed with melanoma skin cancer during their lifetime.

Skin cancer is the fifth most common cancer in the UK. 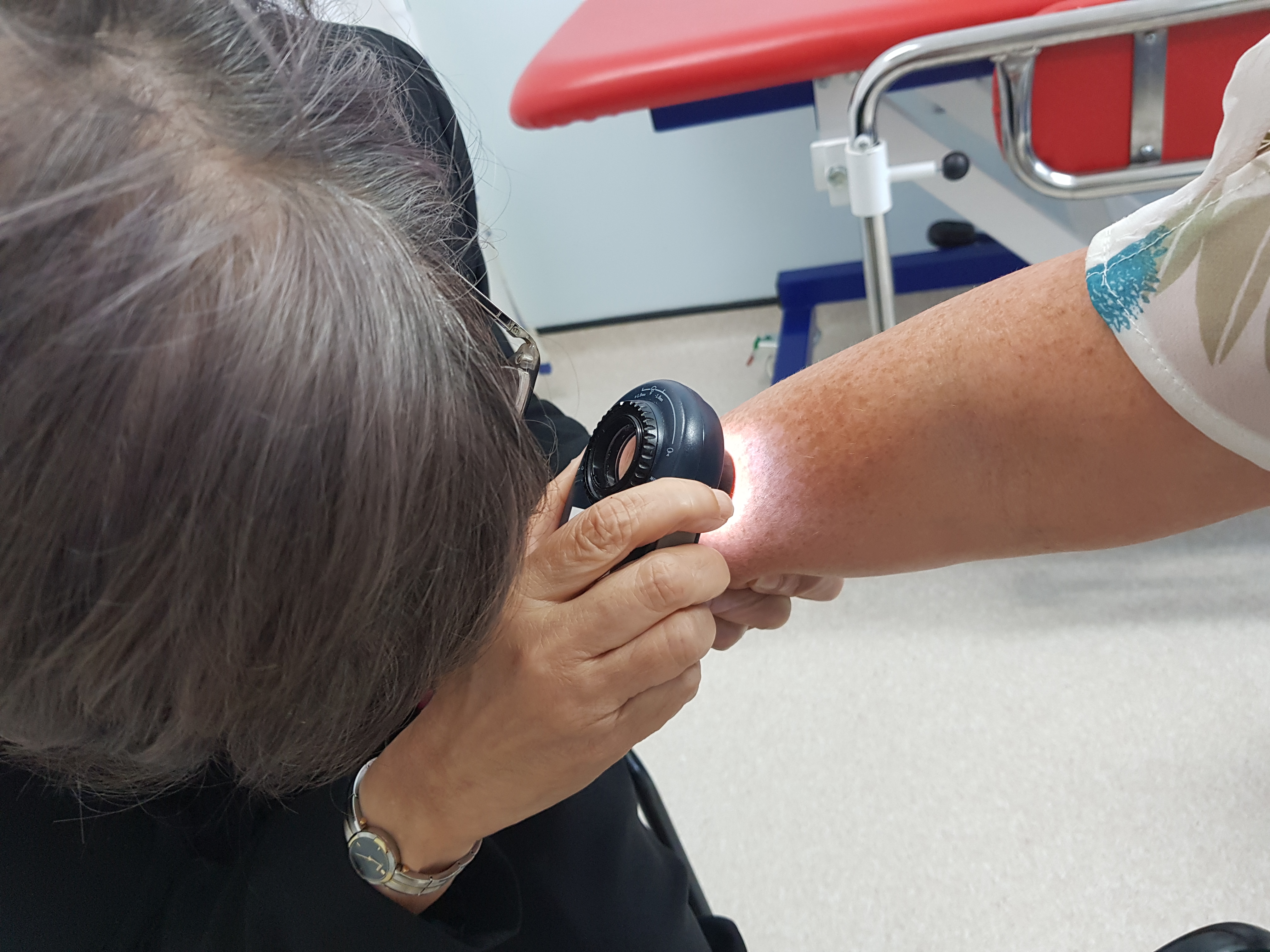 The British Skin Foundation says at least 100,000 new cases of skin cancer are diagnosed each year, with more than 2,500 people losing their lives. That’s seven people each day.

There are slightly more cases of melanoma skin cancer in men compared to women, 51 per cent compared to 49 per cent.

There has been a 128 per cent increase in the number of people diagnosed with skin cancer since the 1990s.

Most cases are diagnosed early, with 91 per cent diagnosed at stage 1 or 2, increasing a person’s risk of survival. However, people living in more deprived areas are less likely to be diagnosed at an early stage.

How does the sun damage my skin?

Sunlight contains ultraviolet A (UVA) and ultraviolet B (UVB) radiation, both of which can harm skin causing sunburn, pigmentation, ageing and skin cancer.

UVA rays are known as the “ageing rays” and are up to 50 times more prevalent than UVB rays. These rays penetrate skin layers, damaging collagen and DNA, causing wrinkles, loss of elasticity and pigmentation.

UVB rays are known as the “burning rays” are mostly affect the skin’s outer layer. These rays cause sunburn or tanning, both of which increase the risk of skin cancer.

While radiation is higher during the summer and at midday, it has the potential to burn and cause damage all year.

Am I at risk of developing skin cancer?

Although it’s less common in children, skin cancer can affect you at any age.

You’re at greater risk if you have pale skin which is prone to burning, with light or red hair and freckles.

If you’ve had severe sunburn, especially which caused blistering particularly in childhood, you’re at a greater risk along with people who have more than 50 ordinary moles.

Those with unusual moles, larger than ordinary moles, present in large numbers and with irregular shapes or colour patterns, are also at a higher risk of developing skin cancer.

People who have already developed skin cancer or have a relative with the disease and people with suppressed immune systems also face a greater risk.

Other risk factors include working outdoors or spending a lot of time outdoors and using sunbeds or sunbathing regularly.

What can I do to protect myself from skin cancer?

Avoid the sun between 11am and 3pm, when it’s at its most powerful between March and October.

Wear a wide-brimmed hat that shades your face, neck and ears.

Long-sleeved tops, loose trousers and long skirts in close-weave fabrics do not allow sunlight through and opt for sunglasses with wraparound lenses or wide arms with the CE Mark and European Standard EN 1836.

Don’t forget your sunscreen. Choose one with a sun protection factor (SPF) of at least 15 to protect against UVB or the “burning rays”, although experts recommend one with a minimum SPF of 30 in addition to shade and clothing. Pick one with “UVA” in a circle logo with at least four-star UVA protection.

Apply sunscreen at least 20 to 30 minutes before heading outside and reapply at least every two hours.

Stay away from sunbeds and sunlamps.

Keep babies and children out of direct sunlight.

Tell your doctor is you spot any changes to a mole. Changes of concern are illustrated on the Cancer Research UK website. If your GP shares your concerns, make sure you’re referred to a consultant dermatologist on the GMC’s register of specialists.