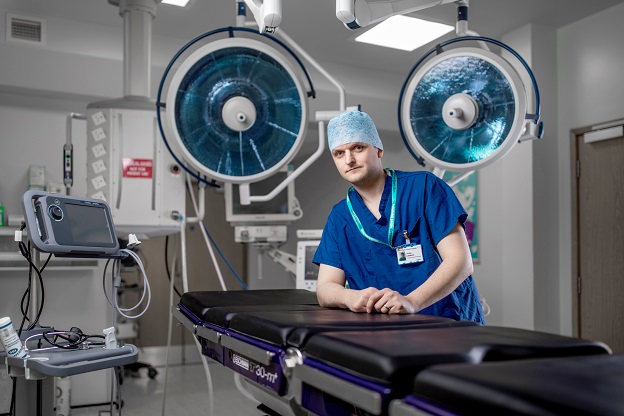 A former chef has told how he gave up his job in a Michelin-star restaurant to work in hospital operating theatres after his wife had an emergency Caesarean section.

Phil Darwick, 34, was a chef at the Pipe and Glass in East Yorkshire when wife Anna, a nurse, was rushed into theatre to have their first daughter Lily.

He remembers how an operating department practitioner (ODP) calmed him down as his wife was prepared for surgery before supporting the family after the birth in 2009.

Phil, who works for Hull University Teaching Hospitals NHS Trust, said: “I was really nervous, shaking and quite tearful but this guy started talking to me about generic stuff like football and it just helped me.

“It was the most stressful situation I’d ever been in. Never once did he say anything like everything was going to be fine but he was just so professional and it helped.” 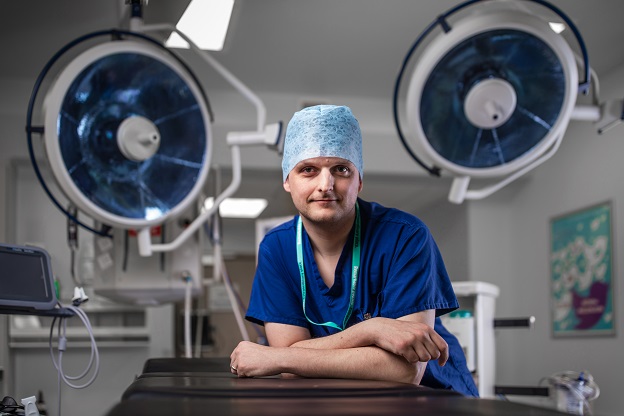 Already contemplating a career switch for a better work/life balance, Phil considered lecturing and nursing before he spotted the course description for an operating department practitioner (ODP) at the University of Hull.

He completed a year-long access course at Hull College before qualifying as an ODP in 2013, joining Hull University Teaching Hospitals NHS Trust.

Originally assigned to elective orthopaedic surgery at Castle Hill, he was then promoted into a more senior role in general surgery after 18 months.

Now dad to Lily, 8, Seth, 6, and two-year-old Arthur, Phil is now clinical practice educator, acting as a link between the trust and the university and supervise around 45 ODP students working on placement at Hull Royal Infirmary and Castle Hill Hospital.

Although he arranges all student placements, from work experience students at St Mary’s College in Hull to international nursing students, Phil also works one day a week in the theatres at Hull Royal Infirmary, supporting patients undergoing all forms of surgery from neurosurgery to vascular or orthopaedic trauma.

“The best part of my job is seeing people go from being an ordinary person off the street to a fully qualified ODP,” he said.

“We have mentors who work with the students and I am there as additional support in a supervisory role. They can come to me for advice and information and I’m always there in the background to help them.”

Phil is so passionate about his job and working for Hull University Teaching Hospitals NHS Trust that he was one of the staff members chosen to appear on posters for the trust’s Remarkable People, Extraordinary Place recruitment campaign.

He said: “I love what I do and I’ve never regretted making that change.

“It might not seem like it at first but there are a lot of similarities between what I do now and what I did then. You stand up for a long time, you have to communicate effectively and work well under pressure, especially at Michelin star level.

“And at the end of the day, it’s all about customer satisfaction although, for me nowadays, it’s patient satisfaction that matters.”