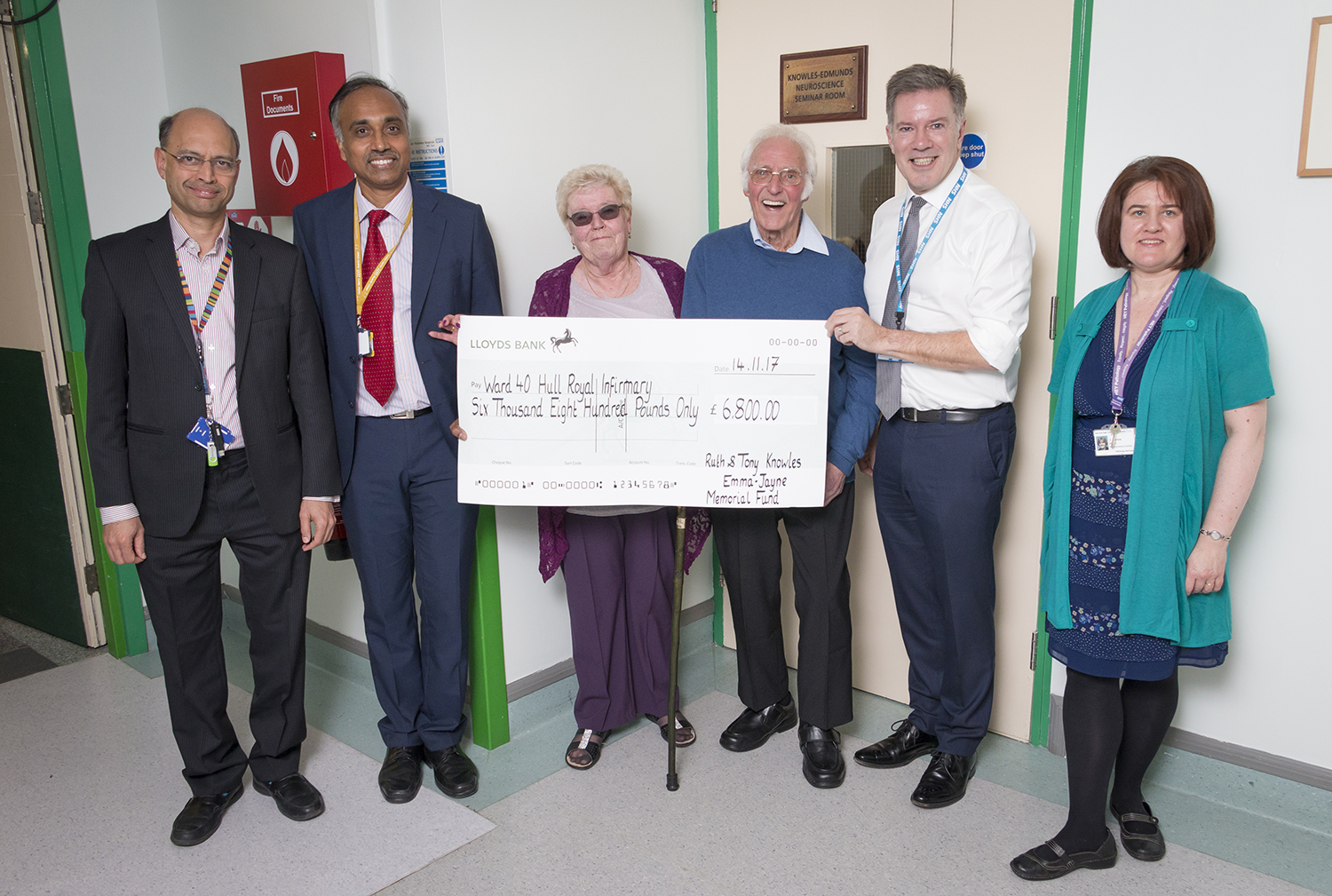 A couple who have donated more than £150,000 to a hospital neurosurgery department in memory of their daughter have pledged to continue fundraising.

Ruth and Tony Knowles have donated £6,800 to Hull University Teaching Hospitals NHS Trust, bringing their fundraising total to £153,000 in the 19 years since daughter Emma-Jayne died.

At a presentation attended by neurosurgery staff, trust chairman Terry Moran and trust chief medical officer Kevin Phillips, Mrs Knowles said she and husband Tony would never give up trying to help the trust, which runs Hull Royal Infirmary and Castle Hill Hospital.

She said: “As long as I can draw breath, we will carry on.”

The couple began fundraising for the trust after Emma-Jayne died of an inoperable brain tumour in 1998.

Emma-Jayne was working as a post woman for the Royal Mail when she started experiencing double vision and cold hands. She went to her GP and an MRI scan revealed she had a brain tumour.

She was admitted to Hull Royal Infirmary in April 1998 under the care of consultant Kevin Morris and was found to have a rare brain tumour affecting just one in 1.5m people.

With the tumour too deep in Emma-Jayne’s brain for surgeons to operate, she received 35 radiotherapy sessions but died in December 1998, six days before Christmas and two weeks before her 23rd birthday.

Her parents asked for donations instead of flowers at Emma-Jayne’s funeral and raised £1,100, donating half to the GP surgery and half to Hull Royal Infirmary’s neurosurgery department.

When they attended Hull Royal to hand over their first cheque, Mr Morris told them he was attempting to raise £12,000 for a spinal turning bed.

Determined to achieve something good in their daughter’s memory, the couple embarked on a fundraising challenge, raising the money for the bed through a series of charitable events including a popular annual bikeathon event.

However, they decided to keep on raising money for the hospital and, 19 years after their daughter’s death, they have raised enough money to pay for dozens of pieces of vital equipment.

Mrs Knowles said: “When Emma-Jayne was brought here, everyone was fantastic and we wanted to say thank you.

“There are so many youngsters now with cancer and everything else. If we can give something back, it helps.

“It won’t bring Emma-Jayne back but it helps. As long as I can, I will keep on going.”

The couple, of Sutton-on-Sea in Lincolnshire, were awarded the British Empire Medal in the New Year’s Honours List in 2014 in recognition of their fundraising efforts.

Presenting the couple with a bouquet when they visited Ward 40, and neurosurgeon Chittoor Rajaraman said: “They have raised a phenomenal amount of money for us over the last 19 years and we’re very grateful for all they have done.

“It encourages us and gives staff such a morale boost when people take the time to thank us like this.

“It is amazing to see the incredible amount of effort they have put in and we are so glad they have received the Queen’s recognition for the work they have done.”