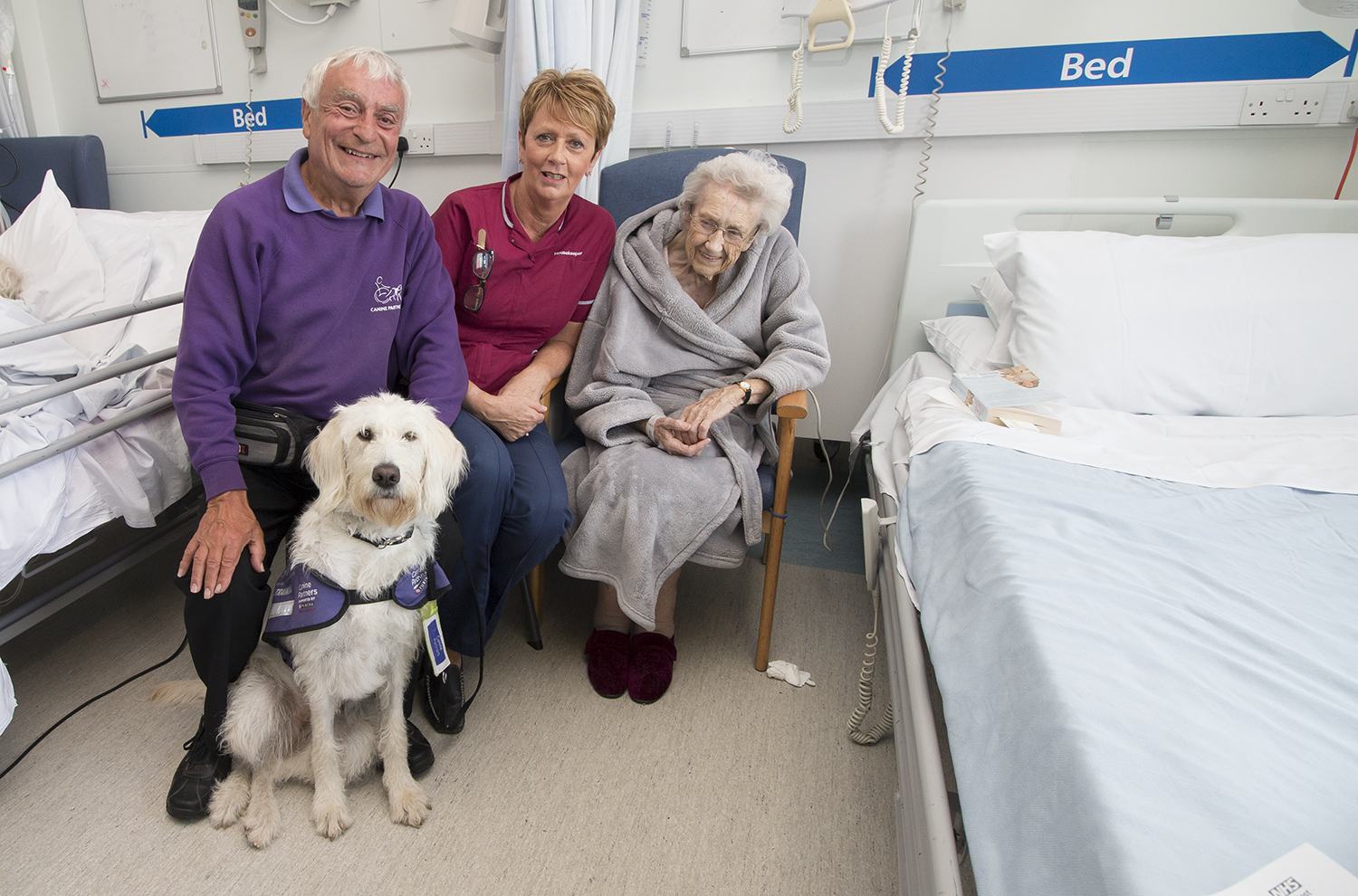 For most hospital patients, visits to the ward tend to come from the doctor, a therapist, friends or loved ones. Elderly patients spending time on Ward 9 at Hull Royal infirmary, however, are now receiving visits from a new four-legged friend.

Nudel is an 14 month old Labradoodle who is training to be an assistance dog with Canine Partners. Once a month, Nudel and her Puppy Parent, Mike Cormack, come on to the ward to raise a smile among patients and give Nudel herself experience of socialising in different environments.

Once fully trained, Nudel will be matched with an appropriate owner who requires help with daily tasks; often this is someone living with a long term health condition such as Multiple Sclerosis or Muscular Dystrophy, or it could be someone who has been injured in military service.

In the meantime, Nudel is serving as a welcome talking point among patients and staff, and bringing enjoyment to those patients who may be temporarily parted from their own pets.

“It’s great for Nudel to be able to come into Hull Royal to get used to the sights, sounds and smells of a hospital environment. This is also a socialisation exercise for her, so it gets her used to people and how to behave when she’s working.

“She can already perform a number of tasks and understand a lot of commands. She’s used to picking things up off the floor and retrieving things, but she can also push and pull which, once she has a permanent owner, will mean she can help with everyday tasks such as dressing, closing doors, opening drawers, and turning light switches on and off.

Nudel is being trained through Canine Partners, a registered charity bringing greater independence and quality of life to people with physical disabilities. As well as visiting hospital, Nudel and Mike also visit older people in a care home, journey on buses and trains, visit shops, supermarkets and even restaurants to get Nudel used to working in busy areas.

“Before we brought Canine Partners on to the ward, we carried out a survey amongst our patients which found that many of them were bored and felt they had little to occupy them during the day.

“As a team, we’ve been looking closely at what we can do to keep older people engaged and active while they’re in our care, and generally brighten up their days. Animals as therapy have been trialled elsewhere, and so we decided to give it a go and begin canine visits to the ward, with a really positive response.”

The Royal College of Nursing is currently drawing up guidelines for medical institutions on how to use animal therapy safely and effectively in order to benefit patients. In a survey carried out last year, 82% of nurses surveyed by the RCN said animals could help patients be more physically active and 60% said they believed animals improved physical recovery.

“As well as the obvious enjoyment which some people get from animals, we’ve also seen other benefits for our patients from having the dog in already,” Dr Thomson continues.

“Some patients with dementia who may otherwise appear quite withdrawn engage very well with the dog, and we’ve also seen a calming effect for some patients if they’re anxious. Nudel also serves as a talking point for people, whether it’s patient to patient, patients and relatives, or patients and staff, and this not only helps to pass the time but these social interactions also benefit our patients’ sense of well-being too.”

Canine visits are just one of a series of events and activities organised for older people by the staff on Ward 9 to promote regular physical activity and social interaction; other schemes include exercise to music and reminiscence therapy.

Nudel will begin advanced training on the 20th November, where she will be assessed over a period of eight weeks. Mike describes this as, “a very sad day for us all”, but if accepted, her training will then be tailor made to benefit one suitable person on the Canine Partners waiting list.