The family of an East Yorkshire farmer have thanked hospital staff for caring for him at the end of his life as they prepare for their first Christmas without him.

Geoff Broumpton, 86, died on Ward 9 at Hull Royal Infirmary from heart failure, leaving his devoted family to mourn a man they say “led from the front.”

Today, his son-in-law Jeremy Smith said: “I don’t have a high enough accolade to describe the professionalism and care we were shown by everyone on Ward 9.

“The whole team were instrumental in making Geoff’s last few weeks as comfortable as possible, despite him being very poorly.

“No job was too much for them and I can’t begin to tell you how that has helped us cope with Geoff’s death.” 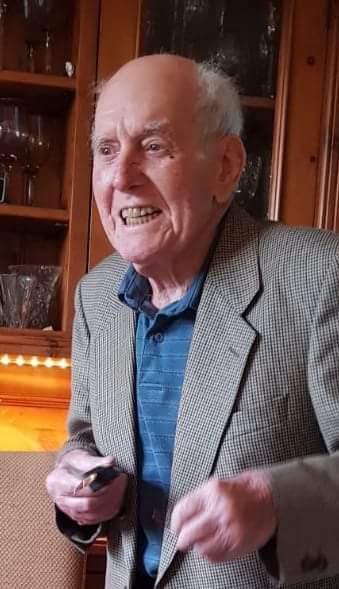 Mr Broumpton’s family were so touched by the care he was given on Ward 9, they returned to the hospital in the run-up to Christmas to thank staff personally, and to give a donation of more than £400, raised from the funeral collection.

Chief Nurse Mike Wright thanked Mr Broumpton’s relatives for taking the time to come back to Hull Royal Infirmary to express their gratitude.

He said: “Our staff are often thanked for the work they do to save people’s lives. But it is of equal importance to us that we care for people with the same dignity, compassion and respect when they are coming to the end of their lives.

“We know Mr Broumpton was loved by his family and that they have gone to the trouble of thanking staff on Ward 9 means the world to them, especially at this time of year when we’re all thinking about our own loved ones.”

Mr Broumpton was married to Joyce and they had three children – Maria, Ian, and Carole, who died of cancer.

He was well-known in East Yorkshire’s farming community, heading Stansted Grange Farm in Brandesburton which he built with support from his son Ian into a hugely successful business

Mr Smith said: “Geoff was a gentleman and a gentle person to the core, with valued family intentions and principles.

He developed sepsis and was brought into Hull Royal Infirmary, moving onto the Progression to Discharge Unit on Ward 9. However, he developed pneumonia before his kidneys and heart began to fail.

With members of the family trying to fit in visits around working commitments, ward staff ensured the family was able to visit Mr Broumpton outside normal visiting hours with catering teams ensuring they were always welcomed with a hot drink and a biscuit as they sat by his bedside.

“As a family, we were made incredibly welcome at all times,” Mr Smith said. “From the lovely tea ladies to the nurses that cared for Geoff, the whole team is a real asset to the HRI.

“We as a family will be eternally grateful for everything you all did.”

Mr Broumpton lost his battle for life on September 3.

Mr Smith said: “The dignity shown when Geoff passed away was professional and extremely caring, especially to Joyce and Maria who were with him at the end.”

The Progression to Discharge Unit has now been moved to Ward 80 on the eighth floor as part of a reshuffle of services in the Department of Medical Elderly at Hull Royal.

In a direct message to staff working on the unit, Mr Smith said: “Thanks to you all, good luck in Ward 80 in the future and you will be an asset to all the patients you look after in the months to come.

“You will never be forgotten in our thoughts as we continue to mourn Geoff who without doubt led from the front, managing the farm, to ensuring his family were safe and well.”

Sister Kirsty Norris says “Caring for Geoff and his family in his final weeks was a privilege.

“For his family to come back to the ward and not only thank us but to donate money to improve the ward environment for other patients, has left me touched.

“I am very proud of everyone in my team, who I know all work hard to deliver quality care.”