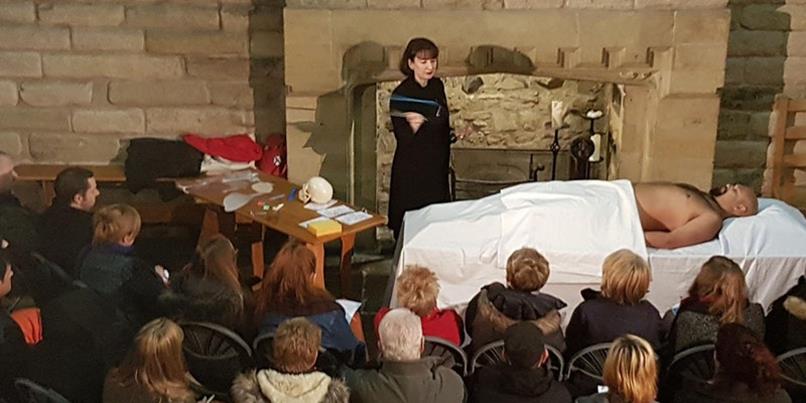 Around 200 students are to watch a “living autopsy” performed by one of the country’s leading pathologists to understand the perils of modern living.

The volunteer, dressed only in their underwear, will lie on the autopsy table covered by a sheet while Dr Lishman uses their body to illustrate what happens during an autopsy.

Chris Chase, the trust’s Pathology Training Manager, said: “It is a real honour for Hull to host such a prestigious event and underlines our national reputation for the work we do in pathology.

“We hope the living autopsy will give students an insight into the work, see how post mortems inform our understanding of disease and show how we live can dictate how we die.”

Described as the “public face of pathology” by the Health Service Journal, Dr Lishman was named one of the 50 most inspirational women in health care in 2013. She was only the second women to be elected President of the Royal College of Pathologists, holding the post from 2014 to November 2017.

She is credited with initiatives such as National Pathology Week, increasing public understanding of the crucial role performed by pathology teams in the NHS.

Dr Lishman will come to the Medical Education Centre at Hull Royal Infirmary on Wednesday, November 7, as part of this year’s National Pathology Week to perform two “living autopsies”. The first session takes place in the morning for NHS staff.

Schools including St Mary’s Academy, Newland School for Girls, Hymers and Aspire Academy, which serves vulnerable students within Hull and the East Riding, and Sixth Form Colleges Wyke and Wilberforce will be invited to send students to the afternoon session.

Although no real blood or body parts will be on display, the trust is restricting the invitation to older teenagers.

Chris Chase said: “The aim is to give them a real insight into what happens during post mortems and for that to happen, we’re saying it’s not suitable for the very squeamish.

“We hope the young people will find it a valuable learning experience both from their own perspective of understanding the need to adopt healthy lifestyles and from gaining insight into the vital role pathology plays in the treatment of disease.”