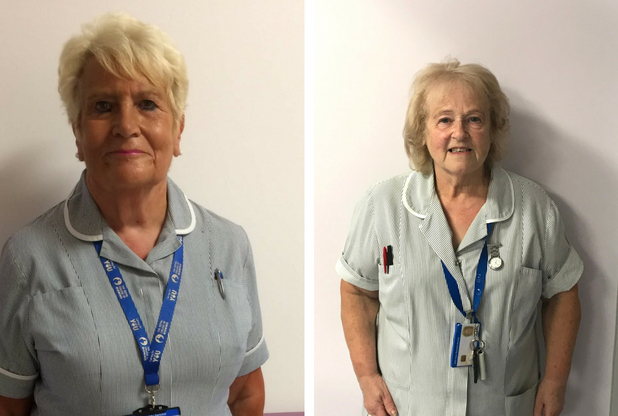 They were little girls when the NHS was created, offering universal health care to everyone whether they could afford it or not.

Pat, a mum of two from Beverley with four grandchildren and one great grandchild and another on the way, said:  “I can’t imagine not doing this because it’s been part of my life for so long.

“When people see me, they don’t ask me how I am. Nowadays, the first thing they say is ‘Are you still here?’

“My husband does mention to me from time to time about retiring. But that’s because he has to drive me to work so it means he wants to watch the cricket or go swimming.”

Janet, who has two children and two grandchildren, said: “I reduced my hours from 30 to 20 a couple of years ago with views of trying to wean myself off work. But I’m still here.

“It has been a privilege to work for the NHS all these years. I’ve seen so many changes but I’m still smiling.”

Pat (above left) was born in 1941 and became a nursing cadet at Beverley Westwood. She started nursing training at 18 but it halted when she married husband John a year later.

She worked as an auxiliary until her first daughter Sharon was born in 1962. Pat wanted to return to the Westwood after Sharon was born but there were no vacancies so she went to work instead at a local hospital in Brandesburton. 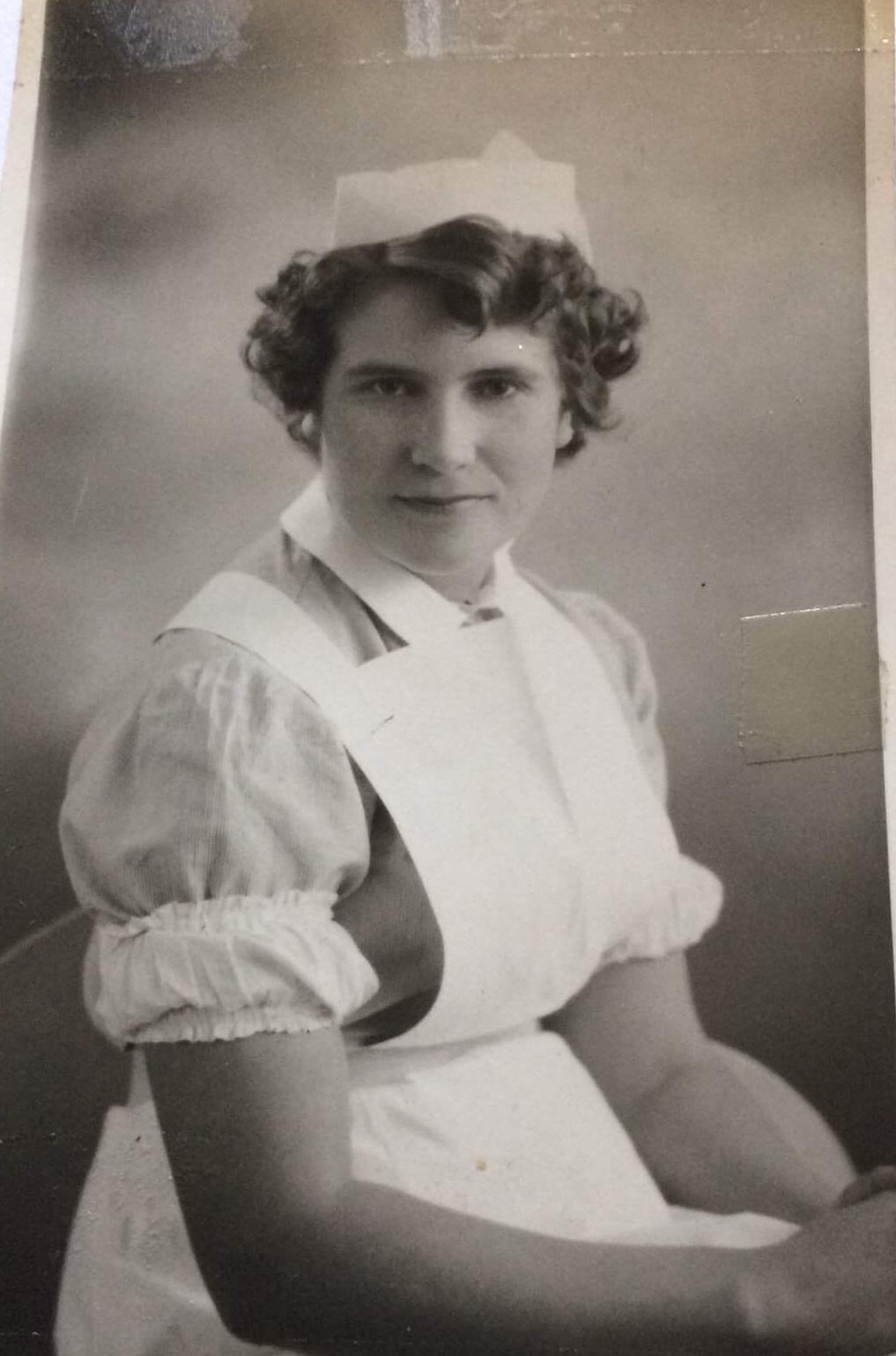 Pat Watts, when she started her training

She had second daughter Deborah in 1965 and returned to the Westwood Hospital in 1966, working nightshift on the wards.

She transferred to the Cottage Hospital annexe, looking after women on gynaecology wards and working alongside a night sister.

The introduction of the State Enrolled Nurse changed the tasks of an auxiliary. Pat was moved back to the Westwood when the annexe was closed and joined the maternity team.

When maternity services moved from Beverley, Pat transferred to Castle Hill as a midwifery assistant, supporting women in the labour and postnatal wards.

Pat worked in the Jubilee Birth Centre, supporting midwives to look after women and training in baby massage before the centre closed in 2012.

She then transferred to Hull Women and Children’s Hospital and now works two nights a week on Maple Ward, the antenatal ward for women requiring additional care or who are due to be induced, and Rowan Ward, which looks after women after their babies are born.

Pat supports the midwives and medical staff looking after the women, helps the women through the night and is a vital support to the younger, less experienced staff who can rely on Pat’s vast knowledge.

“I’ve done all my NVQs,” said Pat. “I know it’s important to keep up with my training online.

“I just really like looking after the women and their partners. This is such a friendly team and it’s really nice to be part of it.”

Janet (above right) started her orthopaedic training at Bridge of Earn Hospital in Scotland and, even as a student nurse, took charge of a busy Nightingale ward at night, with the night sisters visiting twice or three times a night to check all was well.

She married husband Robert, who was in the forces, and they moved south, with Janet joining maternity services at a cottage hospital in Aldershot and then Frimley Park Hospital in Hampshire.

Robert got a posting in Yorkshire and Janet visited Beverley Westwood Hospital to see about a job. 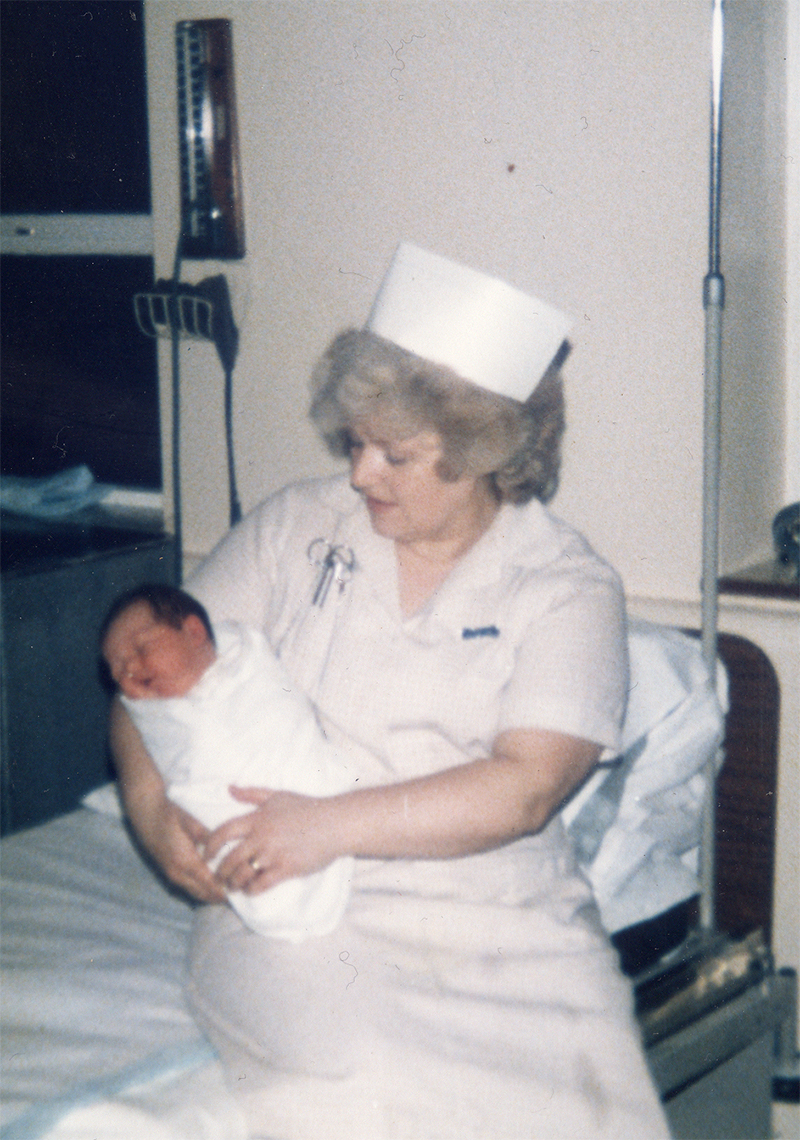 Janet Harley, earlier in her career

“I got an interview and was asked by Matron if I could start that night as they were short of staff on the baby care unit,” she said.

Janet moved to Castle Hill Hospital and worked on the special care baby unit and on the labour and delivery ward before transferring to the new Hull Women and Children’s Hospital in 2003.

She worked on the labour and delivery ward for 14 years before moving to Maple Ward and cut her hours back last year, working just two night shifts a week.

“I still continue to do labour ward, theatres and work in the midwifery-led unit and I keep myself up-to-date with all the study days and online training,” she said.

“I enjoy the teamwork. I was asked many times over the years if I wanted to do my midwifery training but my priorities then were my two children and childcare was difficult in those days.

“I’ve been on nights for 59 years now and they fit well into my lifestyle.

“People call me the ‘lovely little lady’. I always say I was six foot when I started nursing, now I’m down to four foot nothing.”