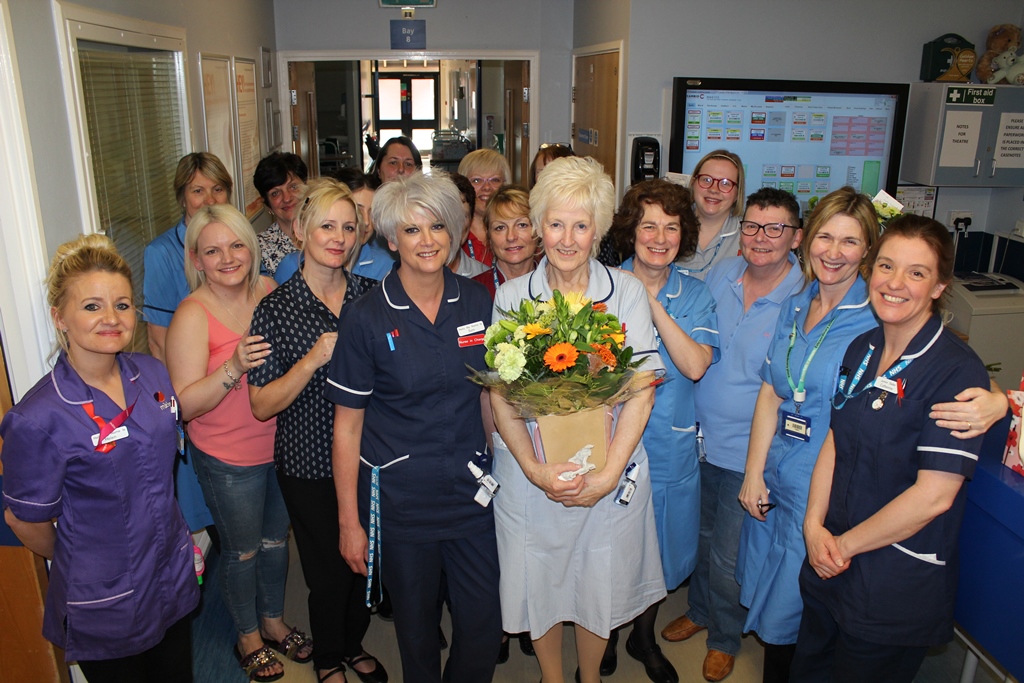 A Beverley woman whose NHS career spans more than 33 years is set to retire today, less than a week before her 75th birthday.

Jo Howley spent five years nursing at Beverley Westwood Hospital before moving to Ward 11 at Castle Hill Hospital when it opened 28 years ago. She has worked on the ward as a Clinical Support Worker ever since, caring for patients who have undergone colorectal surgery.

“I’ll be 75 next week but I really don’t feel it. I just love working here, I’ve been so happy and I’m really going to miss the people; both the patients and the people I work with, it’s such a great team.

“The NHS has changed a lot over the years, but things have definitely changed for the better and I’ve loved being a part of it.”

Colleagues have already treated Jo to farewell flowers and gifts, and around 40 work colleagues, past and present will, be joining her for a celebratory meal this evening.

Tracy Kelly, Staff Nurse on Ward 11, has worked alongside Jo since the ward opened. She says:

“I have worked with Jo for 28 years, so she really has become my right hand woman. She’s such a calm and caring professional, you can trust her with anything, and she’s been an emotional support for hundreds of patients over the years as well as someone who provides them with physical nursing care. She’s one in a million.”

“There’s never any drama or crisis with Jo, she just goes about her business; we often say she never rushes around, she just floats! When I met Jo I remember saying she’s just like a mum, she is so thoughtful and supportive. They certainly don’t make them like Jo any more, and we’re sad to see her go.”

“Jo has been such a good role model for our new starters. We know that if we put a new auxiliary or student nurse with Jo, we know she will support them and teach them right. She is a credit to the Trust and to the NHS in general and even now, she can still knock spots off some of our younger nurses; she’s going to be irreplaceable.”

Once she has formally retired, Jo plans to holiday in France with her family and spend some of her spare time gardening.